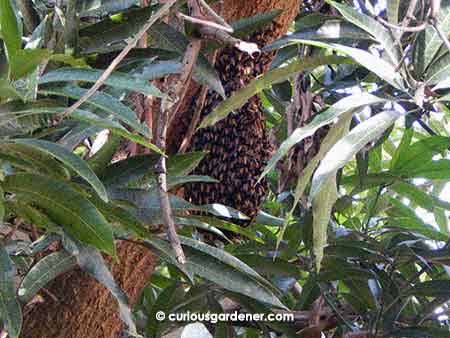 Looks scary, doesn’t it? Beehive under construction on our mango tree.

We’ve had bees nesting around our garden for years. They usually migrate from one location to another after a period of time, and we have had no issues with them – even when they started building their bee “condo” in our bathroom. They nested at the ceiling and we could still (ahem) use the bathroom.

Well, a few weeks ago, one of our neighbours noticed a beehive being built on our mango tree. These folks are simply unused to nature. They freak out over things like beetles and bats, so it was no surprise that they didn’t understand what to do about the bees that they could see. Like I’ve said, we have lived in close proximity with the bees (in our bathroom, right!) and had no clashes with them. Yes, they occasionally flew through the house at night, attracted by the lights, but left to their own devices, they would just keep trying to get to the light until they either gave up or literally dropped dead. We didn’t get hurt, our dogs didn’t get hurt, everyone lived in harmony.

Could our unsed-to-nature neighbours do the same? No. There were a couple of bee sting incidents, no doubt caused by a person trying to wave away a bee. Let me tell you that if one or two bees fly near you, just stay calm and be still. When you don’t aggravate them, they will leave you alone. Wave something at them to chase them away and that will be interpreted as an act of aggression, which will make them want to sting you. Of course, if there are several bees buzzing around you, I’d recommend making a quick exit as calmly as you can. As in, walk away briskly and do not wave your hands to chase them off!

When we realised that the neighbours were having issues – and there would probably be more since they didn’t know or want to learn what to do – we decided to try to have the beehive relocated. Bee populations around the world are at risk, and we wanted to avoid killing more.

I found that there are a couple of bee relocation options here in Singapore:

However, before we could get that underway, somehow, the authorities got called in and we were ordered to take immediate action because the bees were “a danger to the public”. Forget that it’s on private property and only one ignorant person had been affected. However, we are responsible citizens and did our civic duty – even though it went against our personal principles. The hive had to be eradicated, and we were very upset about that. Fear triggered the unbending action of the authorities who do things just their way. And since the hive was on our property, it was also at our literal expense to see to it.

We are not pleased. Speaking for myself, I’d say that too many people have lost touch with nature and need to “de-urbanise” themselves. Fauna and flora were here before people built their homes, and I know I’ve ranted about this before, but I recall the transition from those more rural days when we had snakes and fire ant nests and now-extinct green tree lizards and both toads and frogs and big jungle spiders, and more. I’m not saying I want all of them back, but that we should learn to respect the space and live in harmony with the creatures of nature because they deserve to be here, too. It’s all too normal to want to eradicate things that are odd to us, but I’ve found that when I take time to learn what those strange things are, they’re not always bad. I just wish more people would be aware, too.