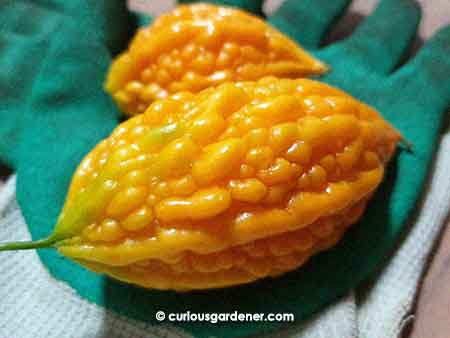 Overripe bittergourds – such a pretty colour!

2019 was a challenging year for me. There were so many things to juggle that I just didn’t have it in me to do much in the garden, as therapeutic as gardening may be. However, as the year came to an end, and I looked back at how little I did in the garden and here on the blog, I eked out a bit of determination to get the ball rolling again.

We had a nice visit with our dear friend “Mother Weed” where we all caught up with each other, and had the inevitable seed exchange session. Despite the family nickname, their garden is neat and orderly – unlike ours, which is still leaning towards being a bird haven.

The recent festive season also included the usual visits to friends’ and relatives’ homes, where I was inspired with a touch of greenness – envy in this case – by the plants and gardens that we saw. 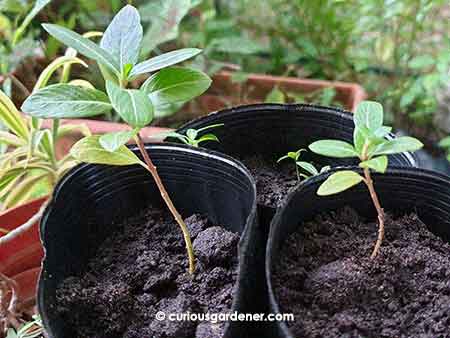 Periwinkle seedlings from my aunt, given during a stroll through her garden.

As part of my new year resolutions, I started sowing seeds once more. The longing to walk through the garden and harvest what we are going to eat has hit me again. Oh don’t get me wrong – we have some plants that supply us, particularly the small bittergourds. However, I miss the old staples of cucumbers, long beans and okra. Those were the best veggies that we had grown.

On top of that, I need to check the viability of some of my seeds. There were a few packs that I forgot to store in the fridge because I thought I would sow them soon after getting them, then forgot about them. Keeping seeds in the fridge prolongs their lifespan by months, and maybe years; leaving them out in our heat and humidity doesn’t do them any favours. I’m so tempted to go around the garden just scattering them wantonly, because if we have to have plants that grow like weeds, it would be so much nicer if they were useful, edible to human plants – unlike the many plants that I shall rant about in another post. However, I’m fairly certain that the birds would have fun consuming the seeds before they had a chance to grow, so I’ll have to do the civilised thing and germinate them indoors first. It’s amazing what birds eat these days. I think they are so desperate for any kind of food that they’ll try anything they find. 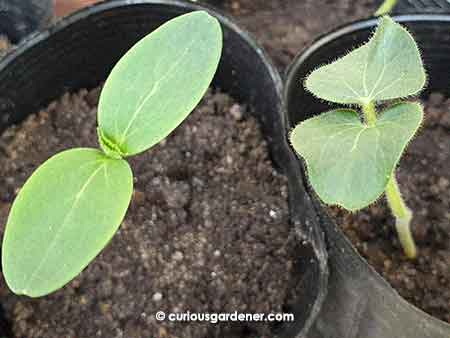 Familiar seed sprouts – cucumber on the left, okra on the right.

I was also a little shocked to realise that this year marks the beginning of the second decade of The Curious Gardener. Yes, I’ve been blogging here for ten years! I certainly did not anticipate how long I’d be writing, but it has been enjoyable sharing my experiences and meeting some of you, so I hope to continue a bit longer. Hence the resolution to get a bit more active as the Curious Gardener once again. So here’s wishing each of you a bountiful and fruitful year in this new decade! 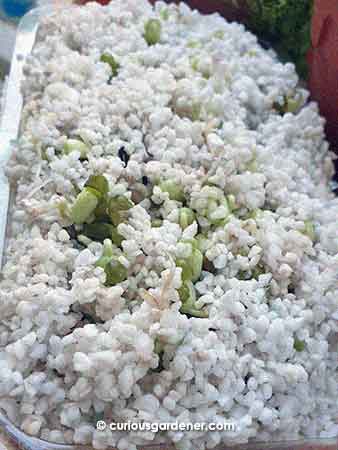 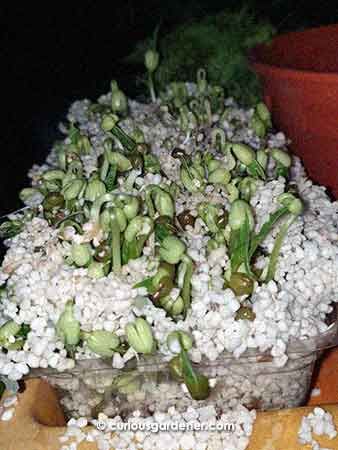 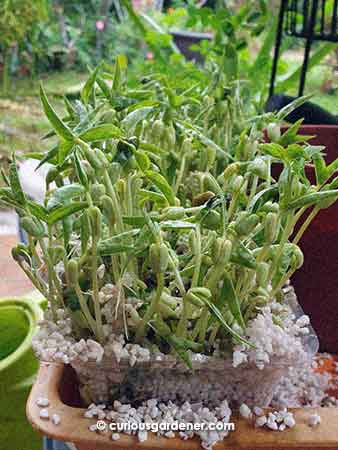 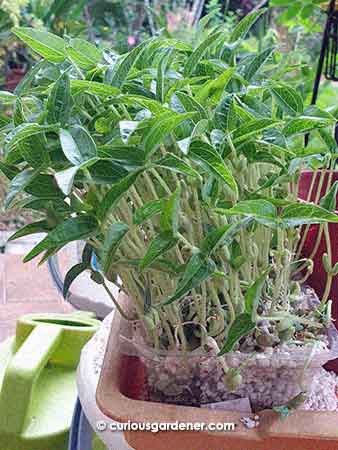 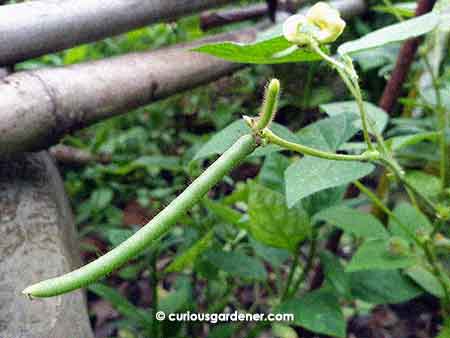 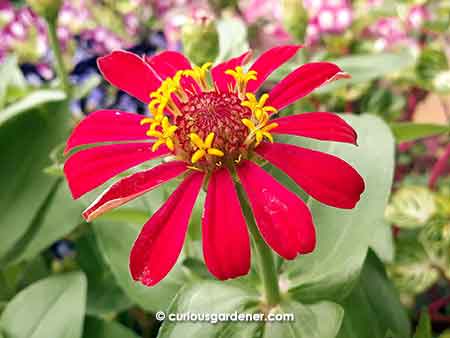 The red zinnia flower that became the apple of my eye.

Some months ago, I went on a little flower-buying binge. One of the plants that had caught my eye was the zinnia. If you recall, I once grew that flowering plant years ago, and it had fascinated me because the composite flower was so visually interesting. Like nature, it “went out of season” with me after a while, so when I saw it at the nursery, I decided to buy a couple of plants – one red and one yellow, because the colours were so vibrant. 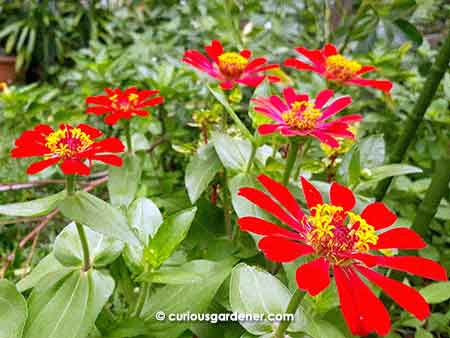 Don’t these red zinnias look gorgeous in a cluster?

When I got home and spent more time with the plants, it wasn’t long before I fell head over heels in love with the red version of the plant. The way the red contrasted with the yellow centre was just too gorgeous. The yellow was pretty, but the entire flower was yellow – and it seemed to attract more pests than the red one (think of yellow sticky insect traps…). I was determined to keep growing red zinnias, so when the first flower had passed its prime, I left it to form seeds. 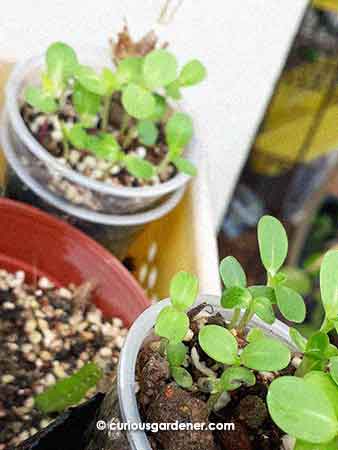 A little forest of zinnia seedlings

I harvested the seeds when the flower head started drying up, and was delighted to get some fully formed, hard brown seeds. I planted them, and then because I hate to waste anything, I threw in the less matured seeds to mulch the ones I had sown. Guess what? A lot of them also germinated! I had a little forest of seedlings, and I planted them out. 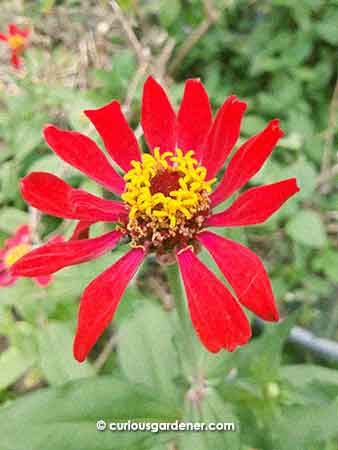 Second generation zinnia flower – looks very much like the parent

That’s when things got “interesting”. Some of the plants were a bit weedy – the stems were long and curly, like they were starved for light (which they weren’t) – and they just didn’t grow into strong plants. Those that did grow looked nice and strong like the parent plant. Then they formed buds, and things again got interesting… 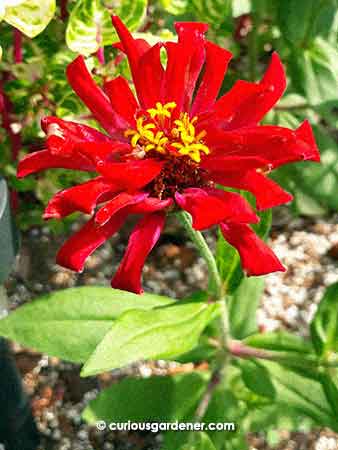 The flower on this plant didn’t form properly – the cluster of yellow flowers is smaller and not arranged in a ring, like the parent’s 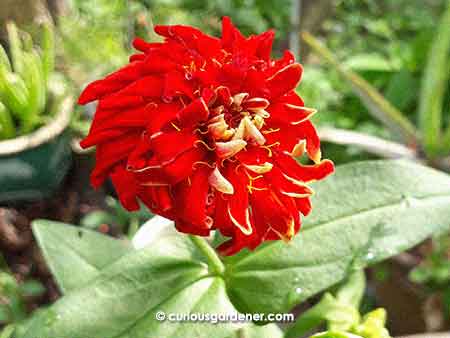 I call this the pom-pom zinnia flower – it has way too many outer petals, and no disc flowers in the centre! 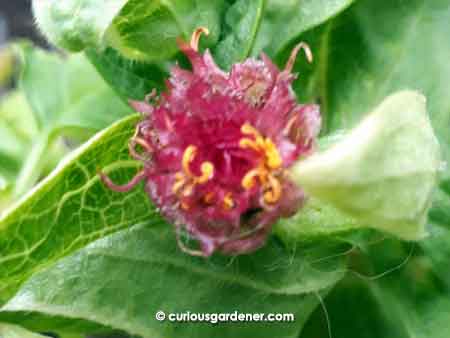 There’s only one thing to call this – a mutant zinnia flower! It had no outer petals, and didn’t form proper disc flowers in the centre. How bizarre!

Lessons learned from this experience – use the best seeds and be firm in discarding the rest. Although the second generation of seeds should be acclimatised to our garden, the quality of plant cannot be guaranteed. It was an interesting experiment, though! 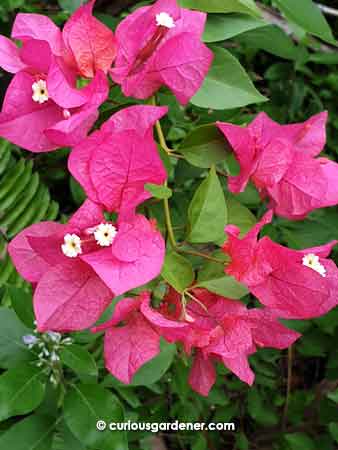 Dark pink bougainvillea – what I consider the more common colour

The heat is on, and our bougainvillea plants are loving it! Every other plant seems to be affected by the hot, dry weather – the lawn is turning brown in bigger and bigger patches, and flowering and fruiting plants are wilting by lunchtime. If we forget to water them for at least two days, there will be fatalities.

I normally despise our bougainvillea plants because I get scratched and poked by their thorny stems whenever I prune them. It doesn’t matter how thick the gloves are or how gingerly I handle the stems – the plants always get their revenge on me. However, the amount of colour that they provide in this weather is just gorgeous! 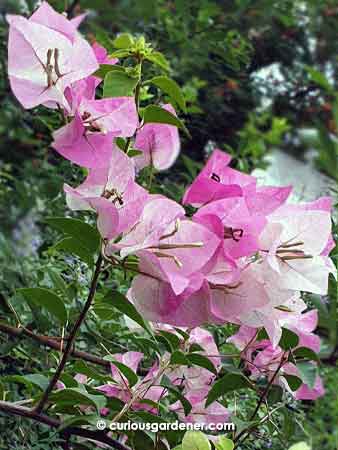 My dad was the one who chose the plants. I have to admit that he had a good eye for this selection of colours! Besides the standard purply-pink, there are a couple of shades of orange, and the lovely bi-coloured pale pink and white variety. I have no idea what their names are; we just go by colour. I suspect a couple of them were given as cuttings. 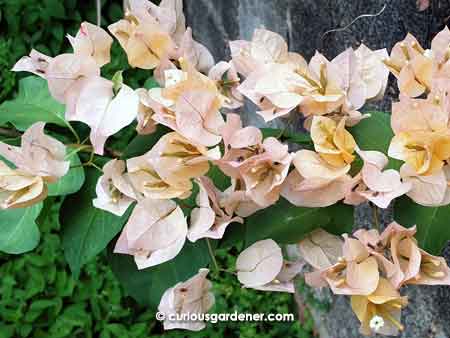 Pale peach bougainvillea flowers – not the most appealing colours to me, but certainly prolific when in bloom!

For years, I’ve been trying to figure out how to get the plants to grow in that nice compact shape, but have been thwarted by them because they seem to burst into bloom only when there’s a long gangly stem. I know that you’re supposed to prune the stem back after the flowers are done, but each time I’ve tried, they refused to to flower, and remain leafy only until they had grown nice long stems… 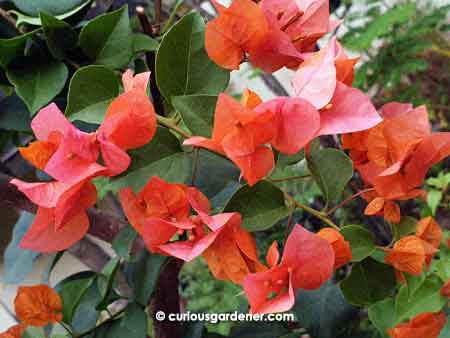 Dark orange, with a tinge of pink bougainvillea flowers – I quite like this colour!

Well, we’ve been through a few phases where for one reason or another, some of the plants have been pruned right back to a single, main stem, and I know from this experience that the plants are hardy and will start growing new stems even from a single, bare woody main stem. So I’ve become more adventurous. We recently planted on a couple of bougainvillea plants that had become pot-bound, and once settling them into bigger, roomier pots, I gave each plant a massive prune, just keeping short stems. It took more, regular maintenance than I’m used to, but one of the plants finally started taking the “bonsai” look. Thanks to the weather, we’ve got the beginnings of that compact flowering look I’ve been yearning after. The other re-potted plant – a purply-pink one -  is stubbornly sticking to the “I’m only going to burst into bloom when I have long stems” attitude. We’ll see if we can come to a compromise or not…