In mid-April, we had the interesting experience of having bees set up home in one of our bathrooms. The weather was quite rainy then, so I surmised that they needed a sheltered home, which happened to be the bathroom just off our kitchen. 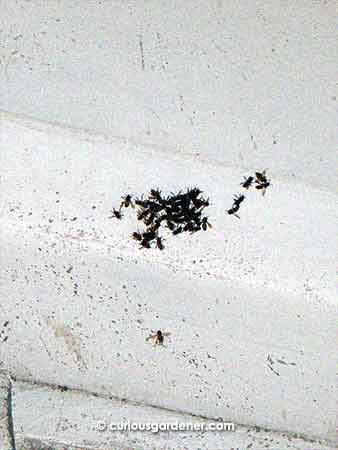 How it begins – a few scout bees come in to check out the place – in this case, just above the bathroom ventilation.

We did try to deter them at first. When we realised that the handful of bees that had flown in through the ventilation holes were settling in, I lit up several incense sticks to smoke them out over the afternoon. By the evening, it looked like I had succeeded, although there were a couple of them up on the ceiling. The following day, when the air had cleared, they returned, found the place available, and then the entire hive arrived… 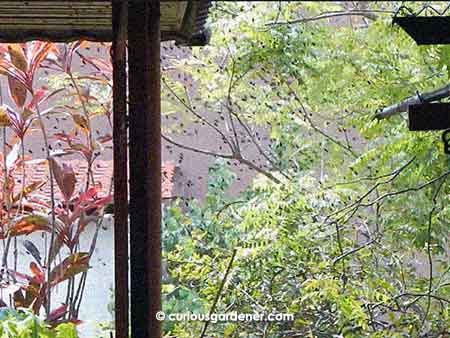 Here comes the swarm… This was a little scary, seeing hundreds of bees hovering outside and waiting to set up the new home. I have this on video, which I’ll upload when I can edit it a bit.

I have to admit that bees are extremely efficient – it took about half an hour for hundreds of them to stream in and settle near the ceiling. This time, they ignored my puny incense sticks and prevailed. I got bigger ammunition – the giant incense sticks used at Chinese funerals. I burned a few of them at a time (they were supposed to burn for 12 hours) over 2 days, but the bees were determined to stay. I gave up because the whole house was smelling so smoky. 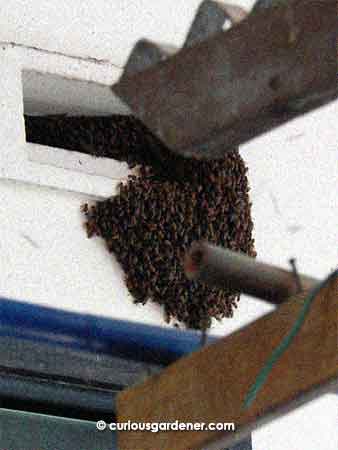 From the outside, you see the bees marching in through the ventilation… 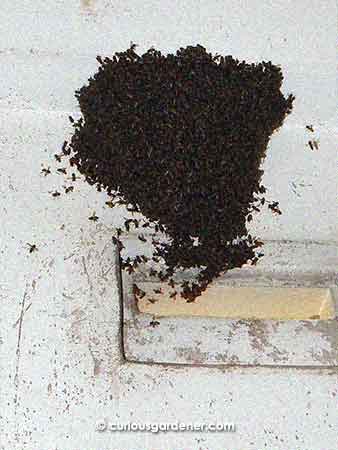 And from the inside, the last of the swarm straggles obediently in. In all, it took less than half an hour for them to go from the buzzing swarm to this stage. Bees are super-organised!

Besides, they weren’t actively disturbing us (apart from our choice not to use that bathroom, although they didn’t mind). We were able to go about our household activities while the bees buzzed in and out overhead through the ventilation holes above the bathroom window.

In case you’re wondering, I did initially call a pest extermination company to ask about getting rid of bees and received a rather large quote for the job from them. We considered that against the fact that these were honey bees (I checked with a lecturer friend at NUS) – which are dying out across the globe from colony collapse disorder (CCD) - and coupled with the fact that they seemed peaceable enough, decided to leave them be. 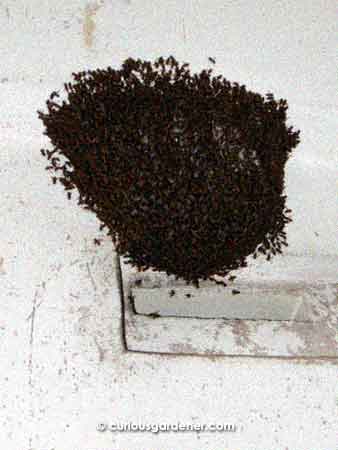 The hive after about 2 weeks – wider and more droopy.

So, a week and more passed, and the hive grew bigger. This greatly perturbed one of my brothers, who decided to really smoke them out. He got a big load of medium-sized incense sticks and made a LOT of smoke. I’m surprised none of the neighbours called the civil defence – after all, it wasn’t hungry ghost month yet. Long story short, the bees were forced to abandon the bathroom, couldn’t decide where to relocate, and for the first time, got a little hostile towards us. I don’t blame them. Just look at the wondrous structure they were forced to leave behind: 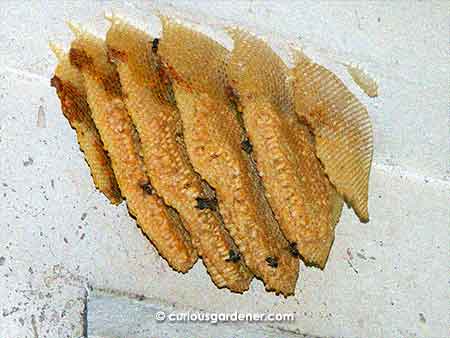 I call this the bee condominium. It’s such a wondrous structure that I wonder what it would have looked like had the bees been left alone.

I’m a little sad that they were chased out, and sadder that we’re not amicable neighbours any more. We suspect they’ve set up a new home nearby, because they still send out scouts that buzz around the lights in the house almost every night.

This experience made me realise that we have no bee keepers here in Singapore, unlike other countries where people can call on them for help, and have unwanted hives relocated instead of exterminated. Just check out this video I found last week on YouTube:

I wish we’d had someone like him here to call on for help!

If you ever have the same experience, I hope you’ll also try first to determine if the insects are honey bees or not; and if they are honey bees, to not have them exterminated unless the hive is somewhere inconvenient or dangerous to you. This is not the first bee hive we’ve had here – just the first one within our living space. From previous abandoned hives, we know that bees will eventually leave the hive and go elsewhere, but we’ve never had the opportunity to know exactly when the hives were started, unlike this one.

As caretakers of the environment we live in, we should try to be aware of the other creatures we share the space with, and how we impact each other. It isn’t right to immediately call in exterminators just because the creatures are alien to us. Remember that they were here first, were displaced by the massive development we’ve done to the country, and they do fulfil important roles in the balance of nature. I’ll go on record and say I’m not pleased with what my brother did, although I understand his concern; however, the bees were peaceful until they were chased from their home and their young were killed by the smoke. I’d be mad too. They need our help to stay alive and we need to educate others that they’re not really dangerous unless they are disturbed (just like people who provoke stray dogs and then complain that they are dangerous because the dogs bit them when provoked). There is also a (disputed) saying that if bees disappeared off the face of the earth, man would have only four years left to live because of its critical role in nature. So let’s keep the big picture firmly in mind.