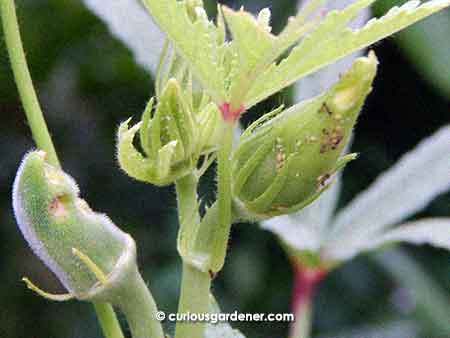 Clusters of okra are normally a joy to see. This time, however, the fruits have been nibbled and aphids are beginning to spread.

It’s that time again when the pests make themselves felt in the garden. We have a row of four okra plants that have been particularly productive, and that we have to search every other day for harvest-ready fruits. It’s especially challenging as the plants have branched out, creating a bushy environment – but you won’t hear me complain about that because more branches means more fruits!

Well, I just noticed the beginning of a yellow aphid infestation. The colonies are starting beneath the leaves and on the flower buds with attentive ants running around them. What I was gratified to see was that the ladybugs had already noticed this and were in attendance. 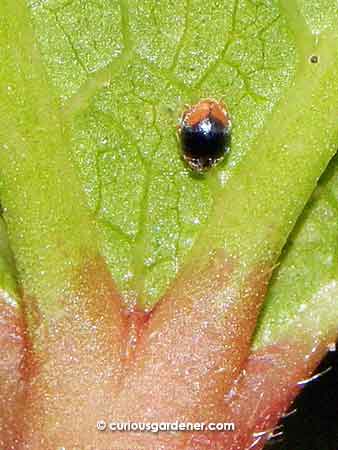 The scymnus ladybug at the base of a new okra leaf. This insect is really tiny!

In this case, it was the scymnus ladybug, which is one of the tiniest ladybugs I’ve seen. It’s only about 2-3 mm long, dusky brown with a bit of orange along the rear rim. In its larval stage, it looks like a white scrubby brush – so alien looking that my initial reaction way back was to want to squash it. After learning what it was, I wanted them to make a permanent home in our garden. Why? Because they also feed on mealy bugs, which I hate with a vengeance. So seeing them on the okra plants now comforts me a little. 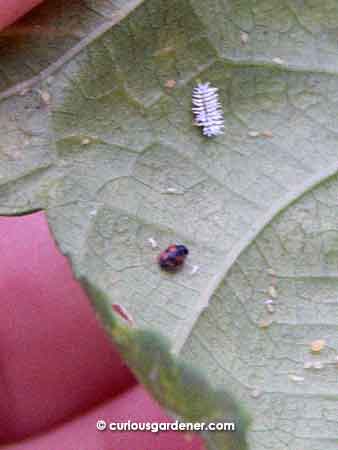 I also noticed that some of the young okra fruits looked scarred, and thanks to experience, also know what caused that. A careful scrutiny confirmed that there were green loopers on the plants. These irritating caterpillars get their name from the way they move, like an inchworm. They are also cunningly the same green colour as the plants they feed on, and no thanks to the way they grow, remain slim and streamlined, making them really difficult to spot. I must have checked every leaf on every okra plant three times, but each time, I still managed to find a new caterpillar. Yes, they eat the leaves in addition to nibbling on the fruits, and in extreme cases, they bore a hole to get inside. I dislike them so much that I barely felt guilty despatching them as soon as I found them. (They once wiped out a really nice batch of caixin) 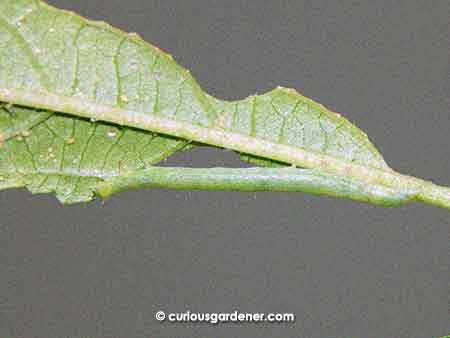 Can you see the green looper stretched across the picture? They’re so slim that when they’re resting along the plant stems, it’s really difficult to spot them.

This means that we’ll have to be more vigilant to keep their population down. I’ll also give the plants a good dose of fertiliser to try to help them to recover from the leaf loss and strengthen them up. And while we already have a couple of other okra plants coming into maturity, this is a good reminder for me to start sowing new seeds to keep our supply of fruits continuous.