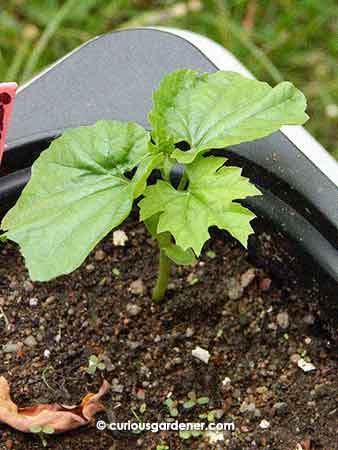 Distinctive seed and true leaves of the bittergourd plant.

I started sowing seeds a few weeks ago with the intention of growing more veggies. Only one plant grew from that day’s endeavour – a single bittergourd plant out of five varieties of plant seeds sown. Maybe my seeds are a bit old, or maybe I should have waited for the right phase of the moon… Whatever it was, I need to start all over again.

That one plant, though, started growing nicely in the container where I had started my seeds, and I knowing how I tend to procrastinate planting things, I decided to get it planted out in the garden where it could thrive as soon as possible. My policy about veggie vines is to let them take root in the ground since growing them in containers limits their size and lifespan. So, this baby was planted at the location of last year’s bittergourd vine since the trellis was still handy. The trellis needed a little beefing up, but that didn’t take much time. 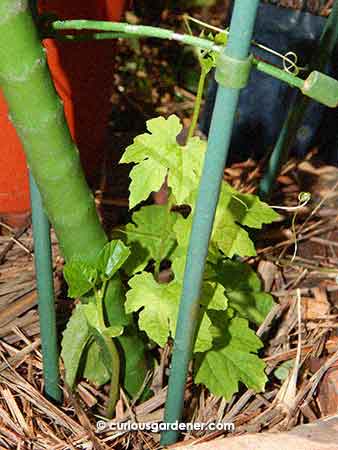 Bittergourd plants starting to thrive at the base of the trellis.

The weather was a little hot, though, and I was concerned about whether the little plant with its three sets of true leaves would be able to withstand the transplant shock. So I got a little overprotective. I prepared the spot the day before, first digging about 10cm down then filling the hole with water to soak the soil. Then, I filled the hole with good earth and watered that thoroughly, too. I had recently thinned out our lemongrass and had old leaves handy, which I cut to shorter lengths and used as a thick layer of mulch. The next day, I watered the bittergourd plant with seaweed solution about half hour beforehand. Seaweed solution is said to help plants cope with transplant shock. In due time, I removed the mulch, transplanted the bittergourd plant, and watered it thoroughly with more seaweed solution. As a afterthought, I decided to stick in another bittergourd seed next to it in case the plant didn’t make it. The weather was pretty hot at that time and I wasn’t entirely optimistic, but I replaced the mulch and placed a few potted plants around the spot to give shade. The plant looked very sad and wilted for the first couple of days, but began to perk up after almost a week and is starting to grow nicely again. I also just saw that the seed had germinated, so it looks very promising that we will be eating those little bittergourds in several weeks’ time. Yay!