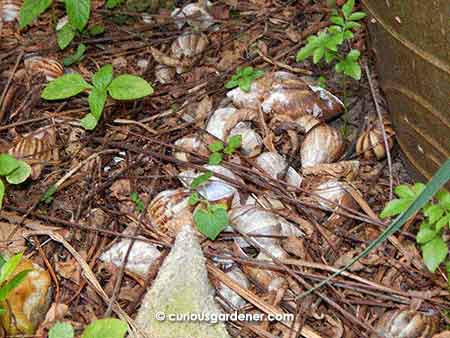 Something occurred to me recently. It used to be that whenever I ventured into the garden after it had rained that I would see what looked like an army of snails everywhere on the ground. Okay, maybe that’s a little exaggerated, but there would be many visible snails of all sizes happily travelling across the wet grass or venturing up plants and trellises where I would usually remove them from.

Lately, though, there don’t seem to be that many of them. As a matter of fact, I’ve been finding lots of empty snail shells scattered especially along the edges of the garden.

Then I got a little concerned whether there was some kind of disease that had wiped them out, because our immediate neighbour also noted the lack of snails in their garden, too. However, we had not encountered a situation where there were dead, rotting snail remains like after you scatter snail bait around, so I ruled that out, too.

So the mystery remained… What had happened to the snail population in the neighbourhood?

Well, one night I suddenly realised that there was quite a bit of high-pitched squeaking going on in the garden. Whenever we hear squeaks, we usually presume it’s rats making the noise. However, there’s something else that squeaks at night, and that’s the garden shrew.

We discussed the shrew last year and if you recall, snails were on the list of things they eat. It looks like they have found a nice food source in our neighbourhood, because another neighbour a few lanes away has also noticed a decrease in snails.

One good thing about animals in nature is that whenever they find a source of food, they increase their population (like ladybugs breeding on plants infested with aphids), and when the food source dries up, they move on to greener pastures or breed less. The one thing I’m not thrilled about is the prospect of predators of shrews coming in, because this includes snakes… Owls would be more interesting, though.