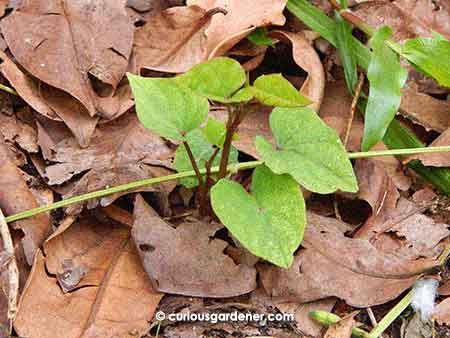 Sweet potato plant popping up from under the thick layer of mulch.

The weather is beginning to get hot and dry again, although the northeast monsoon season isn’t supposed to be over just yet. However, I’m anticipating those horrible dry months when the soil dries out quite thoroughly and the lawn dies, and we have to make sure our precious plants are watered a few times a day.

This is compared to parts of the garden that I rarely water, like the sweet potato patch that surrounds the marrow vine. That is a mostly unmonitored part of our garden that has plants I consider to be established. It’s a patch surrounded on three sides by trees that provide both shade and one thing that I forgot to consider – mulch in the form of fallen leaves.

I already know that the leaves of the peacock trees are good fodder for compost. They are small and break down within a week or two, and are rather abundant in supply in our garden. 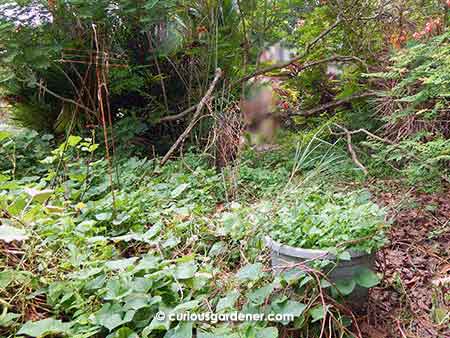 Yes, it looks scarily messy and overgrown, but those sweet potato vines are shading the ground mightily well, surrounded by trees on three sides. None of them are watered by us. You can call this a natural system based on nature. The marrow vine starts somewhere in the middle, to the right. You can’t tell because it was such a hefty plant that my trellis collapsed!

Then there is the jambu or water apple tree. Those leaves are thicker and more waxy, and take a really long time to break down. I used to try to run them over with the lawn mower to break the leaves into smaller pieces so that they would decompose faster. However, what I didn’t consider was that having such a thick, slow to decompose layer of such a material could be a good thing.

The whole idea of having a layer of mulch is to provide a protective layer from the heat of the sun that both slows down evaporation and keeps the soil cooler. I didn’t realise that beneath the sweet potato leaves was such a layer of mulch built from leaves from both sets of trees. What I suspect has happened is that the peacock tree leaves decomposed quickly to feed the soil while the jambu tree leaves provided the protective layer. This has resulted in an abundance of sweet potato vines that, together with the mulch, has probably helped the marrow vine, which has been the most productive ever! We used to harvest about three marrows per vine in our past experience when there was no mulch whatsoever. This time, we’ve harvested about fifteen fruits (we lost actual count). 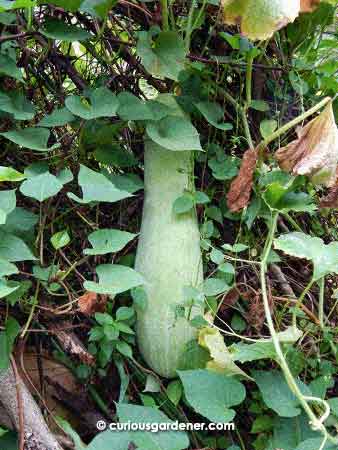 Another whopper of a marrow growing. With fruits like this, wouldn’t you be willing to live with the overgrown looking patch? :-P

So I think this is a system that works – tall plants to provide shade and mulch material, together with ground cover plants that are dense and close to the ground. Needless to say, I’ll look into other plant combinations, just for the joy of learning more!