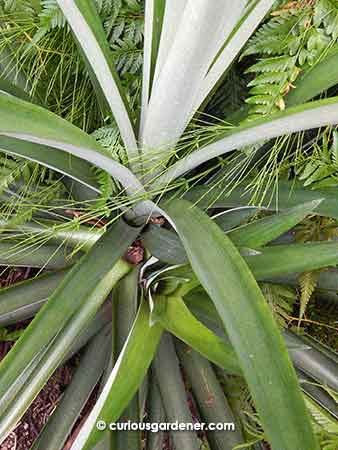 The pineapple plant with the two suckers growing out after the fruit had been harvested.

We started growing pineapples four years ago. Those first plants were started from the tops of some over-ripe pineapples, of which only one survived and managed to bear a fruit after over three years. It seemed excessively long to us, but when the fruit had been harvested and devoured, we decided it had been worth the wait. So the pineapple top was planted again (not that I would have thrown it away).

The great thing was that the original plant had grown a sucker while the fruit was forming. A sucker is simply a new branch growing off the main plant that can grow and bear a fruit. It can be detached and planted as a new plant. Pineapple plants can grow several suckers. If you leave them on the plant, they will go through the full life cycle and produce fruits, but they will be smaller because they have to compete with each other for food and light. This is known as a ratoon crop. To get nice, full-sized fruits, it’s advisable to pick off the suckers and plant them individually. 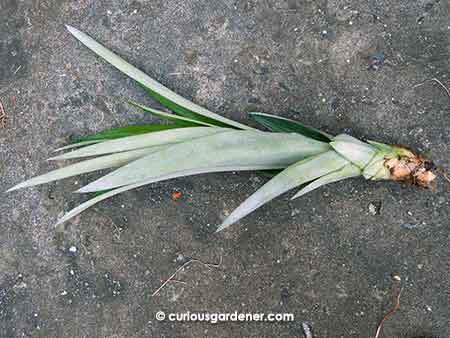 The pineapple sucker that was detached from the parent plant. It was over a foot long.

When we harvested that first pineapple, we decided to leave the sucker on the parent plant to see if it would bear fruit faster. In no way were we willing to wait another three years for the next fruit! (The usual timeframe is about 24 months for growing from a top.) I was also nervous about plucking the sucker and possibly damaging it so that it wouldn’t grow. Well, it’s been about four months, and the sucker looks like a half-grown plant. Who knows, maybe it will bear a new fruit by the end of the year! 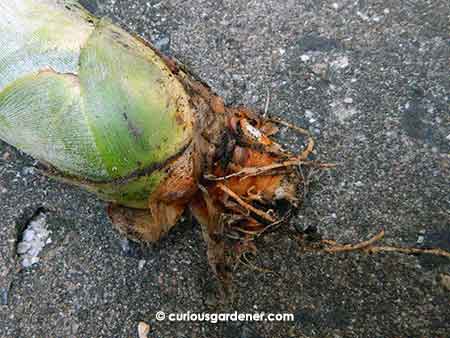 A closer look at the base of the sucker. See the roots growing out?

Last week, I realised that there was a second sucker growing on the parent plant, and since the first one is growing well, I decided it would be alright to try detaching it and planting it elsewhere. The way to do this is to grab the sucker as low as you can, and twist and pull simultaneously while holding down the parent plant (pineapple plants have shallow roots – you don’t want to uproot the main plant!). When I did this, the sucker broke off very nicely.

When I say “nicely”, it means I got the whole sucker without breaking it along the stem. It also already had some small roots growing out at the base. Nice! 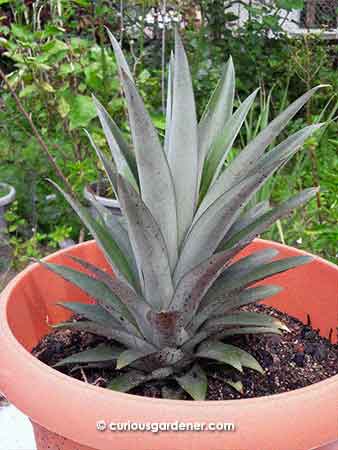 The pineapple top that was replanted in late April.

Since I wasn’t sure where I wanted to plant it, I put the sucker in a pot. The pineapple top we planted in April is also growing in a pot. I may or may not leave them in pots because I can’t decide yet where I want to put them – the leaves are somewhat dangerous with those sharp edges and pointed tips. Pineapple plants don’t have massive root systems, so it’s acceptable to grow them in containers. I haven’t tried that before yet, though. Anyway, you know me – I like testing different ways of doing things just to see what happens. I’m also curious to see if the parent plant will grow more suckers, and how many!