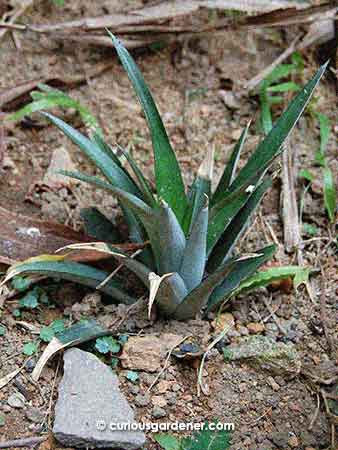 The pineapple crown shortly after it was planted out.

I’m glad I usually take photos of our plants to keep track of their progress (or lack of), because this experiment began over a year ago!

It started with a trio of over-ripe pineapples and a few curious people here. We’d all heard about growing pineapple plants from the tops of the pineapple fruit – but we had never attempted this. So, we kept the tops of the fruits after eating them, and let them dry for a week in loosely wrapped newspaper.

The plants were initially planted out by someone else, within a two square foot area. They didn’t rot away and looked as if they were growing new leaves, so we were excited.

Well, I eventually got around to reading about how to grow pineapple plants, and found out that they spread out a lot and need to be at least a metre apart! I was glad to find out that you can transplant the plants without traumatizing them too much because they have shallow roots, and so two of them were moved to different spots in the garden – one to a full sun position, the other to partial shade. 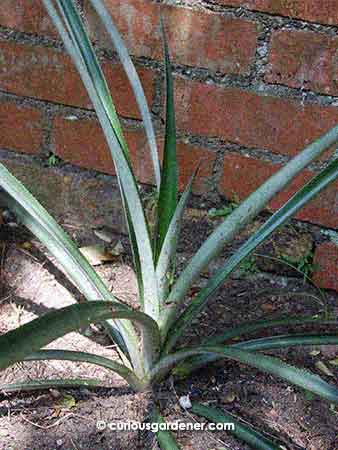 One of the pineapple plants after the transplant – it looks satisfied with the new location and is growing stronger leaves now.

Both plants have settled in nicely and have started growing stronger-looking leaves. Part of the problem with the first spot was that it was too shady, so the leaves were thin and long. Neglect also killed one of the plants, but made us more vigilant of the other two, especially after transplanting them.

I know we’ll probably make a number of mistakes as this is our first time growing pineapples. One of my favourite websites, Tropical Permaculture, has a comprehensive page on growing pineapples, so we have some good guidelines and tips to follow.

And since we have these tips and guidelines, I can share that we are halfway there in our quest to grow pineapples, because it apparently takes two years to fruit! Some gardeners wouldn’t have the patience to try growing them, but if there’s one thing I’ve learned about plants, it’s that they carry on growing whether or not we pay attention to them if they have favourable growing conditions. So, I just need to remember to fertilize the plants occasionally and make sure they have enough water, and we should have pineapples to harvest in another year or so …if we don’t kill them, too! 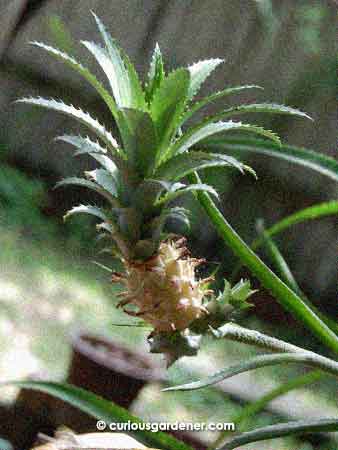 Our ornamental pineapple plant has borne a fruit and is putting out a pair of suckers!