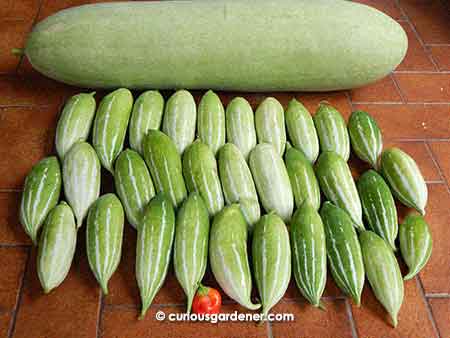 One mighty marrow, lots of short snake gourds and a sweet pepper!

The garden has been very productive – just look at the harvest we had this week!

Marrow #3 has been the best of the lot, coming in at 65cm long and 7.5 kg. It is perfectly formed and looks like a pale green bolster – albeit a rather prickly one! That will be divided and distributed in a few days.

The snake gourds really surprised me. The vine has spread out so much that many of the fruits had been hidden. In fact, several had already become over-ripe and burst open on the vine. My count of this crop is a bit higher than what you see in the picture because I found a few more later on, but it was close to 40 fruits! Naturally, we shared them out as quickly as possible as the fruits don’t have a long shelf life.

The sweet pepper was a surprise. My colleague had given me a couple of young plants, and this one grew on a fairly short, and what I considered immature, plant. On one hand, I thought of removing the fruit to allow the plant to mature more, but on the other hand, I wanted to see the fruit grow!

Hope your gardens are as bountiful!