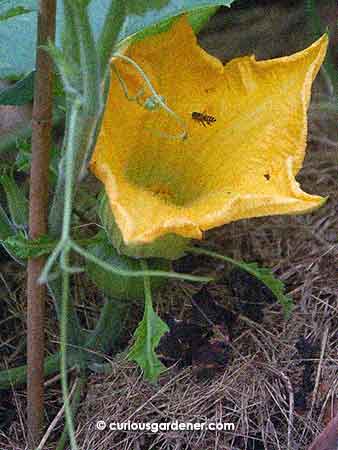 Since we’ve never successfully grown pumpkins (unless you consider having the plants for ground cover), I’ve been slightly obsessed with the current plant that is growing. I think I’ve given it much better growing conditions this time, and from the number of female flowers that have been appearing, I’m feeling rather optimistic. 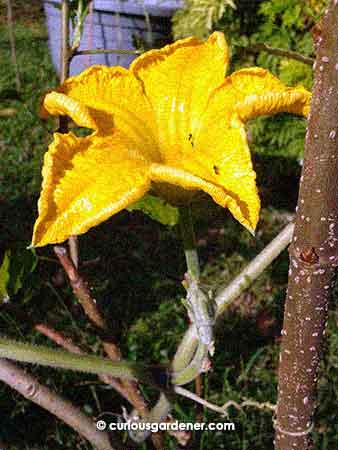 An elusive male pumpkin flower blooming about 3 days before the fruit flowers started showing their stuff. When will these flowers get in sync?!

Since my last update on the pumpkin plants, we’ve seen a few female flowers in bloom. It started a little unexpectedly for me, because I did notice a fruit flower bud that looked rather big (compared to the predecessors), and two days later, when I remembered to go look at it, found that the flower had already bloomed and was already dying off. As the garden gods would have it, there weren’t any male flowers in bloom at the time …until I noticed one on the ground that had just dropped off, and quickly attempted some late hand pollination.

Sadly, it didn’t work, but one must keep hoping.

More female fruit flowers bloomed after that, but they were woefully out of sync with the male flowers, so I just had to admire them when they did, for they are pretty, and they represent great possibilities. One actually stayed open for almost 3 days before giving up. (Stupid male flowers!) 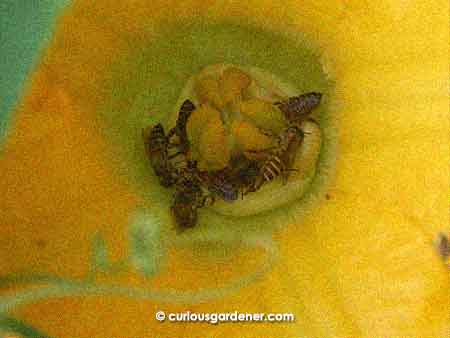 Bees clustered at the base of the pumpkin fruit flower. What are they doing in there? Pollinating? With what?

One morning, though, I saw the latest flower in bloom, and when I took a closer look, found that there was some dark stuff collecting at the bottom of the flower. I wondered what could have fallen into the flower and was surprised to find that they were actually small bees! They were very excited where they were, and I guess the flower must have been emitting something to attract them to it. Pity there were no male flowers in bloom at the time. 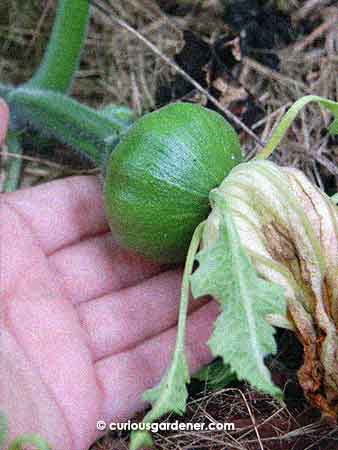 This is the latest female pumpkin flower after blooming – yes, the one that the bees had a party in. If it does grow, it will have been pollinated either with marrow, angled luffa or cucumber pollen. Haha. But I like how each new fruit flower appears bigger and stronger. I have hope!

And so the wait continues. The two new plants continue to grow bigger, and the current vine continues branching out, hopefully multiplying the chances of having more flowers and fruits. Looking at the latest fruit flower, I am optimistic that the plant will eventually bear fruits. How could I not?