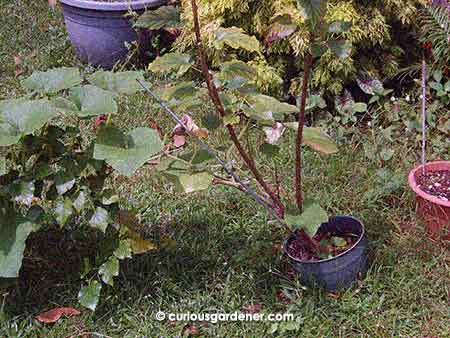 The pumpkin plant originated from the orange pot on the extreme right, then started exploring to the left, finding the mulberry plant, then moving on…

I realize I haven’t been giving the pumpkin plant much of the spotlight although it has been giving us quite a bit of entertainment. After all this time, and I think four different types of pumpkin plants, I’ve still not had the pleasure of harvesting a pumpkin. The only reason I keep trying is that I have seeds (haha) and my buddy Novice Gardener has managed to grow and harvest different kinds of pumpkins in her garden – which proves to me that they CAN grow in our climate, so I have to persist. Until I run out of seeds. 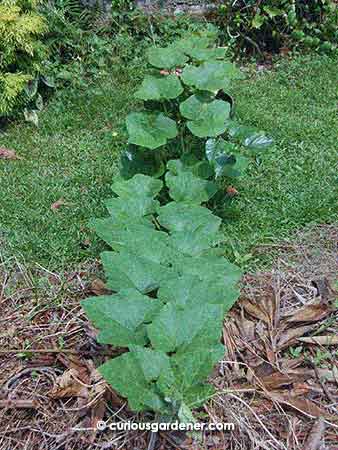 Advance of the pumpkin vine – here you see its descent from the mulberry plant and quick climb up the edge of the compost heap.

The type of pumpkin currently growing is a generic one grown from purchased seeds. I don’t care what type it is, as long as it grows with no or few issues, and bears edible fruits…

Because I never can decide where to place plants that I know are going to spread, I started this one in a small pot and transplanted it to a bigger pot when it germinated and started growing true leaves. That pot went to a sunny spot on the side of the lawn, where of course I thought I’d leave it temporarily, but waited too long.

It grew out from its pot to explore the lawn around it, but when I wasn’t looking (it was raining almost every day back then so I didn’t visit the plants often enough), it discovered the mulberry plant nearby and started climbing up. By the time I noticed it, a female flower bud was sitting demurely right at the apex of the pumpkin stem. Of course I couldn’t bring myself to do anything to jeopardize that bud!

So it continued to grow, causing the mulberry stem to dip groundwards, until the pumpkin plant was back on solid earth, where it promptly set a course for my untidy compost heap nearby. 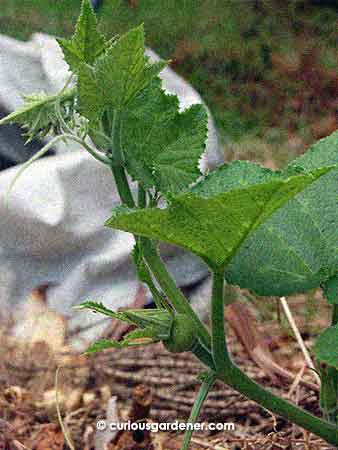 The tip of the vine today, with the latest female fruit bud. It’s just teasing me; I know it’s going to abort as well…

I think the plant appreciated receiving a dose of sheep poo pellets as well as banana peels over the last couple of weeks. Every time I ate a banana, I would go out to the garden and try to decide which plant would benefit from the nutrients in the banana skin, which I buried near the base of the lucky plant. 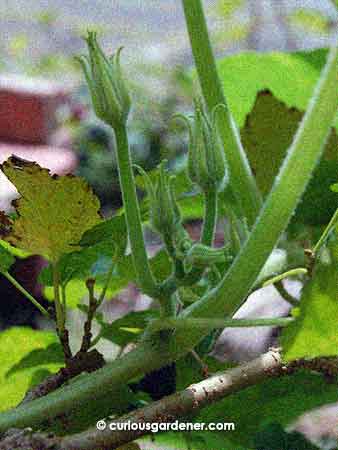 A nice cluster of male pumpkin flower buds, at different stages of maturity. Hm, maybe the plant knows what to do to start bearing fruits! And, yes, this is the part of the vine that’s up on the mulberry plant.

Along the way, I also worried that a single plant might not be sufficient to produce male and female flowers for pollination, so I’ve started two new plants, that need more time to grow bigger, because at this stage, a single adult snail would finish them off in no time.

After they started growing, though, I noticed that the first plant had started to develop multiple male buds at its nodes! Maybe a single plant can take care of itself. 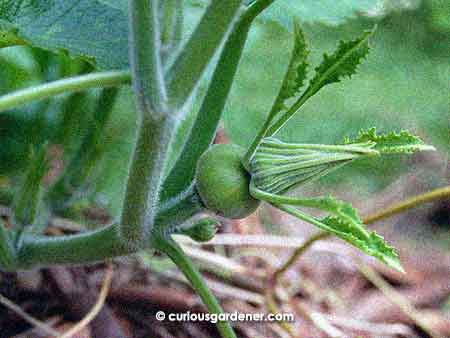 Maybe this will be the bud that sets fruit; maybe it won’t. It looks pretty and full of possibility, though!

So, in the meantime, the first pumpkin plant looks set to take over the compost heap, while at the other end of the vine a new stem is also starting to grow. I think that I will be renaming that part of the lawn “the pumpkin patch” before long! If they give me pumpkins, I’ll give them more real estate; if they don’t, I’ll take a page from Mother Weed’s book and do some massive pruning.