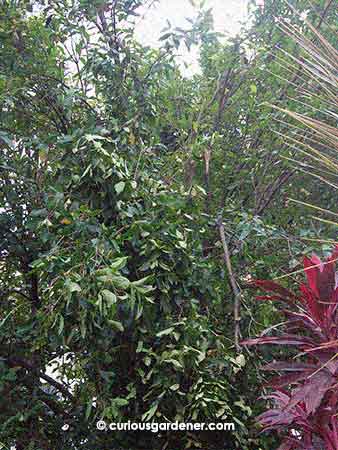 Two of the broken branches in the centre.

I miss having my dad around to make those mundane (to me) decisions about tree pruning. He was the one who was interested in growing fruits, while I focused on ornamentals and in recent years, veggies. My plants were mostly annuals that eventually died off while his were – or rather, are – perennials that grow for a much longer period of time. They also grow much bigger.

It’s been several years since we last had the professionals in to do serious pruning, and it looks like the time is nigh again.

The reason for this post is our green jambu air tree (syzygium aqueum), which is big, has long, lanky branches that are more than 4 metres long, and currently laden with forming fruits. It’s in the spotlight because the heavy rainfall we’ve been experiencing caused a few big branches to break, starting last weekend, making us aware that all the other branches have the same potential, which is not good – especially since they are hanging over the fence.

(From Weed’s blog, it appears that tree pruning is a hot topic in other gardens now, too.) 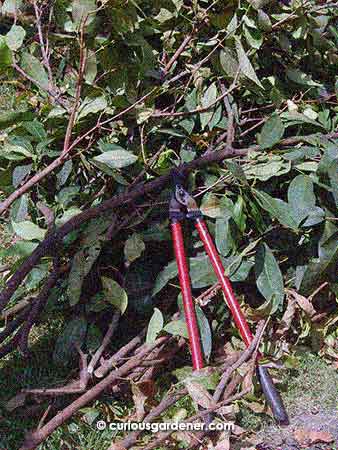 Knowing that the weather pattern here now seems to be hot mornings-rainy afternoons, I made sure I had an early start today, cutting up the fallen branches for disposal. The first branch that fell last weekend was cut and gradually put out for the garbage collectors to take. However, even before the last bags had been put out, more branches broke! I think it’s six, so far, with the last one still stuck up in the tree. I had a great workout today reducing those on the ground into two stacks – one for the larger lengths of wood that we’ll tie and put out, and the other of leaves, softer twigs and fruits that can be bagged up.

I would keep them to make compost, but they don’t break down very well, unfortunately. And gone are the days when we could burn our garden waste…

In the meantime, I expect we’ll need to call in professional tree pruners to reduce the height of the tree. It’s two storeys high and with those long branches hanging over the fence, will require heavy duty equipment to prune safely.

I managed to cut up the fallen branches because the wood of the jambu tree is surprisingly soft. All I needed to use was gardening loppers – basically gardening shears with really long handles – a great investment that we made some time ago. If you go at it from a few sides and angles, it cuts through a 2-3 inch wide branch fairly easily. 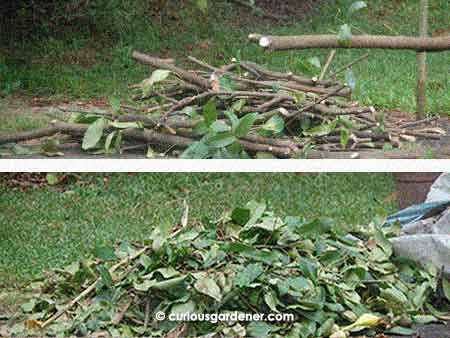 Finally done – branches separated from softer parts of the branches for easier disposal.

This episode has me looking warily at the other trees in the garden that have grown rather big. Instead of looking at them with pride for their fruitfulness, I find myself thinking that I’d better do something to keep them short and manageable…