It’s that time when you suddenly notice an abundance of certain insects, and one of the numerous insects I’ve noticed recently is the Tiger Moth. 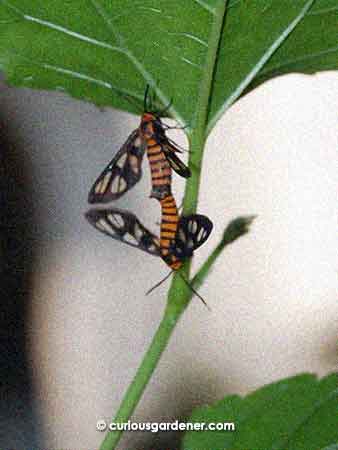 I never used to pay them attention until they caught my eye one day, with their black and orange striped bodies and sort of spotted wings. It was only after I looked them up online that I discovered they were moths. They are so small that I’ve never looked closely at them, being more accustomed to moths as having bigger, hairy/powdery bodies.

Anyway, there are numerous Tiger Moths around now, not just in the garden, but also inside the house – which is why I noticed them in the first place. 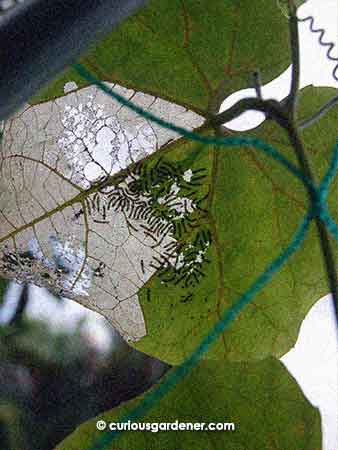 One of the several broods of freshly-hatched caterpillars found here lately.

Some other not-so-welcome visitors are the hairy caterpillars. I’ve found four groups of freshly hatched caterpillars on our angled loofah vines. It appears that a whole bunch of eggs are laid at a time on different leaves at different parts of the plant (sneaky fellas, these moths!), then the caterpillars hatch at around the same time, strip all the lovely chlorophyll from the leaves, before spreading out to other leaves. If you don’t catch them in time, you could lose your entire plant, because you know what voracious appetites caterpillars have…

So, it’s good to catch them when they’ve just hatched because they’re all still on the same leaf. It’s time to be more vigilant!