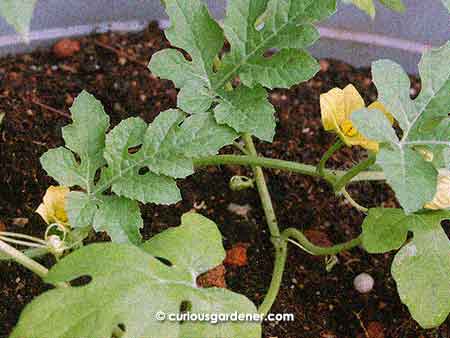 A pair of flowers on the watermelon vine – female on the left and male on the right!

When our watermelon plants began growing, I had them in small growing pots to keep them safe from “predators” such as snails. However, they began to grow rather fast, and before I realized it, flower buds began to form. I quickly prepared a big pot for them, and transplanted two of them on a nice, cool evening.

Yes, we’re down to two plants because one couldn’t recover from not being watered for a day. It was a hot day and I’d forgotten to water the plants before leaving. 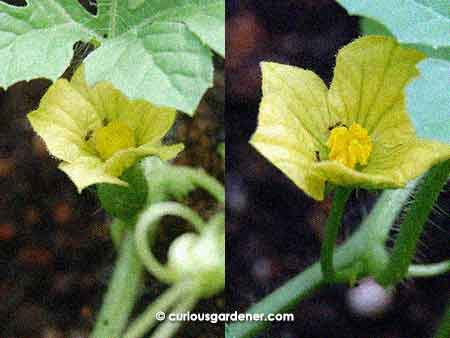 Both flowers had inquisitive ants checking out their offerings, so I decided to wait and see if nature would take care of things…

So the two watermelon plants have been growing happily in a pot about a metre across, and I’ve been encouraging them to just keep growing within the pot. As per the usual cucurbit behaviour, male flowers began to bloom first, and the first female buds aborted. I thought the second one would follow suit, but to my surprise this morning, I found the next female fruit flower in bloom – and it was just about 6cm away from the nearest (and only) male flower on the vine!

A closer look at the flowers showed me that there were a few ants exploring the flowers, and since they were so close to each other, I didn’t interfere by hand-pollinating, because the plants are still young, and I figure if it’s going to set fruit, I’d let it do so when it’s good and ready. The ants usually help me with pollination of several other plants – so why not this one, too? 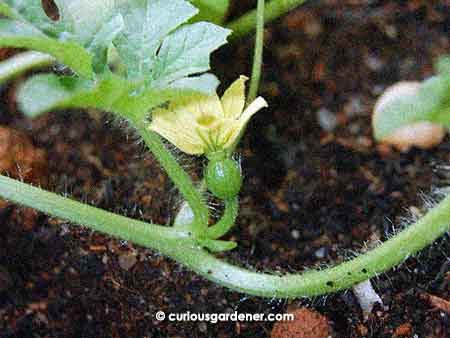 The star of this post – the female watermelon fruit flower!

So we’re going to wait and see if a watermelon will start growing. I guess we’ll know in a day or two…