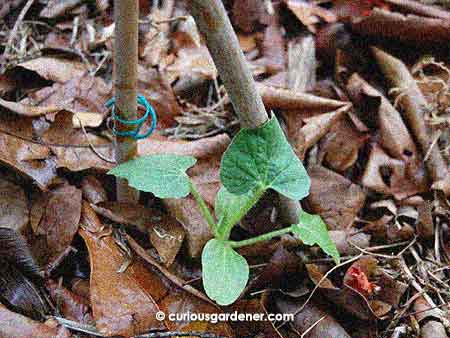 Humble beginnings – the newly transplanted plant with a couple of bamboo sticks for climbing.

I certainly didn’t expect the unknown marrow vine to grow quite so profusely. When I first transplanted it to the veggie bed, it contemplated the new setting for a couple of weeks before it decided it liked it and really started growing. 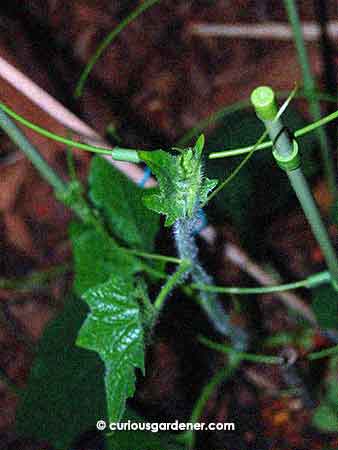 At first, I gave it a couple of short bamboo sticks to grab onto, then a simple ringed tomato trellis. That helped for less than a week, and then the vine started reaching out for something new to climb on. I took a pair of over-2 metre poles and attached wire grids between them. They made a narrow but tall vertical climbing surface that the vine took a week to top. My mum and I contemplated the vine as it seemed to be trying to reach out to the other plants nearby – fruitlessly. 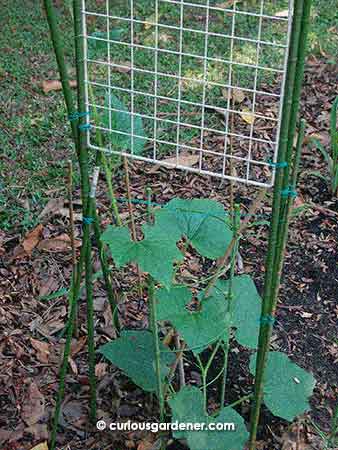 Support Phase 3: a narrow but tall fence-like structure to climb up on. It was more than 2 metres high.

So another add-on was needed. 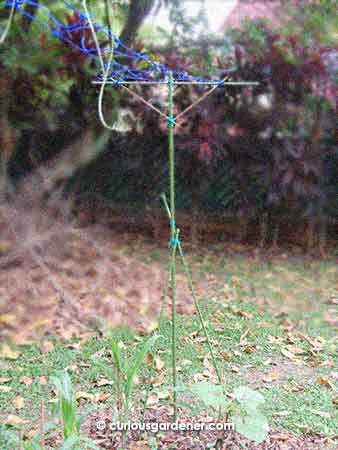 Support Phase 4: the T-stand – and yes, it was inspired by laundry stands… I needed it to not take up too much space at the base because of the other plants in the veggie bed.

I figured the vine needed to travel, so I constructed a T-stand on the other end of the veggie bed and linked both ends with a “rope ladder” made of thin nylon rope. The vine had to be coaxed onto it, and took several days to get the idea. Once it did, it began growing with gusto again. It even grew a few more stems, as a matter of fact. 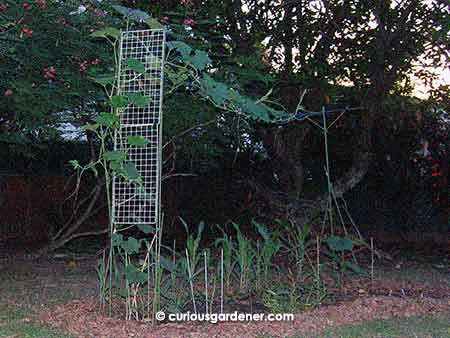 The entire structure as it stands today. I’m nervous about whether it can do what it’s supposed to because this is the first time I’ve made this design, and it’s also the first time I’m growing this plant, so I’m unfamiliar with its habits and needs. It’s very vigorous, though…

The main stem will probably reach the end of the extension in a couple of days, and I think I may pinch off the tip and hope it gets the message to just spread out where it’s growing. And that my trellis will be strong enough to support this vigorous vine…