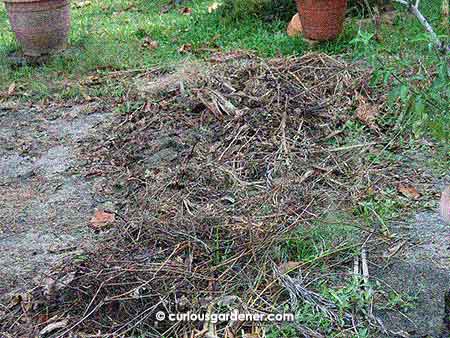 Weeding by mulching on the driveway. Yes, it looks terrible …but it killed off the grass and weeds, and we got compost in the bargain!

It wasn’t that long ago that I wondered about mulching being an easy way to get around weeding, and to test that theory out, I’ve created a few piles of garden waste here and there. People probably think I’ve become a very messy gardener, because they’re everywhere…

Well, that, coupled with the haze that didn’t allow me to go work in the garden for a week, really made the garden look rather neglected over the last fortnight. I’ve since rectified that, but let me tell you about the composting.

I duplicated my first mulching experiment with a heaping of shredded dried leaves where I wanted to create a growing bed for my veggies. When I checked a fortnight later, I was pleased to see that the grass was dying off under the mulch, so I added fresh and old GreenBack compost, and another layer of shredded leaves to cover it. I intended to let this break down over a few weeks before starting to plant in it.

My good intentions, however, lasted less than a month. Let’s just say I’ve already started growing new plants there, and leave the details for another post… However, if I’d known the haze was coming, I wouldn’t have done that. A proper compost heap needs to be moist to work properly, and the hazy weather absolutely sucked the moisture out of everything. The mulch/compost dried out and became dry and chunky, and the plants began to suffer. I hand-watered them once or twice a day, depending on the condition of the soil, and watered heavily with the hose a couple of times. Now that the weather has been normal for a week, things are looking much better. 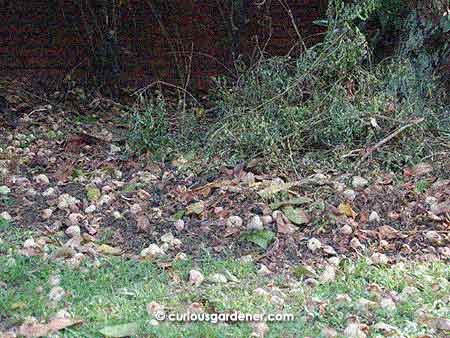 What it looks like when you’re unable to get out to prune or clean for several days – ugly! I don’t like it when things get in the way of my gardening…

The second compost pile began under the jambu fruit tree. It’s a rather large tree, and when it’s fruiting season, tends to litter the ground with pale green, juicy fruits that are quickly eaten by birds, beetles and other creepy-crawlies. The best we can manage at times like that is to rake the fruits into a pile, and add other green and brown organic waste to help with the composting. Thanks to the hot weather, however, this lot dehydrated fast!

The third compost pile began to accumulate on part of the driveway. This was part of my campaign to kill off grass and weeds that were growing out of cracks in the cement – and it worked well. It just looked very messy, but I was interested to note that even earthworms found their way there to help with the decomposition process, and the bottom-most layer resembled soil.

The interesting part about having these compost piles was noticing the sudden increase of different birds in the garden. The fruit-eaters had a feast with the jambu fruits – both on the tree and on the ground – and we watched the ever-present mynahs hopping around with yellow-vented bulbuls, black-naped orioles, glossy starlings and purple-backed starlings. Speckled doves and little sparrows seemed very interested in the contents of the compost heaps, and the brown shrike was perched nearby a lot more, watching for prey on the ground. My mum was thrilled to see a magpie as well. It’s the first time I’ve seen one, myself, but they apparently used to be more common in years gone by. I’d love to get a picture of it soon…

Even the resident Oriental garden lizards gravitated towards the heaps of garden waste. Besides harbouring insects, the piles made an excellent perch for the lizards to sun themselves on. 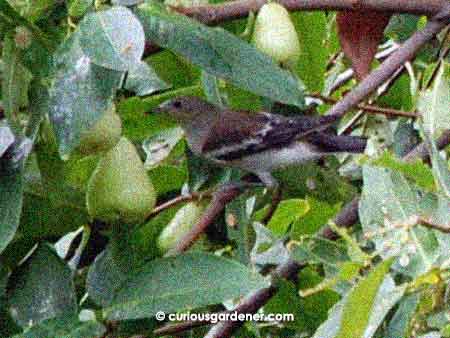 A purple-backed starling in the jambu fruit tree. Is the back really purple?

I know that having garden waste decompose in your garden isn’t the prettiest sight, but if you really want to take an organic approach, mulching and composting are the way to go. The benefits are that you reduce the amount of waste taken away by the garbage collectors, you are recycling your green waste and creating your own compost, and you create a habitat for birds and other wildlife that usually find it hard to find a place to go. If you’re more industrious than I just was, you can do it neatly in an enclosure, as I used to. However, now that I know I can use this as a weeding method, I think it may continue to look a little messy here!