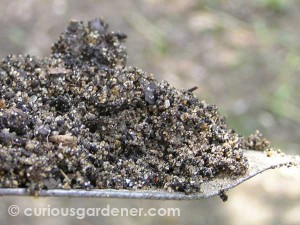 A few years ago, I decided to start a compost heap in the garden. We generally have good soil, but over time, it’s been disappearing, due to general erosion and lack of replenishment. Quite idiotically, we’d disposed of leaves and other garden refuse, instead of returning them to the earth, as Mother Nature would. I wish I’d come to my senses sooner, so that we started reducing our waste and began recycling earlier — getting more compost to simultaneously replenish soil and create a natural fertilizer for our plants into the bargain. Well, I can’t change the past, but I can the present and future.

Compost? Mulch? Which is which?

I initially used to confuse these two. They start out the same – organic matter such as cut grass, leaves, twigs or vegetable peelings that you allow to start decomposing. 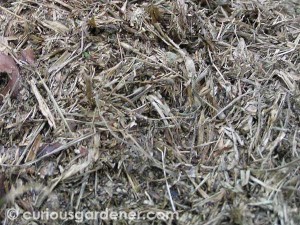 Mulch — in this case, organic — is formed when the leaves, twigs, etc. dry out. It refers to the larger pieces of organic matter, like twigs, bits of wood, fibrous husks and leaves that are slower to break down. If you use it at this point, it can be utilized as a weed inhibitor (put a layer over those weeds and they’ll die without sunlight). It also helps to reduce water and soil loss, and regulate soil temperature. And, when it finishes decomposing, it also enriches the soil. Inorganic mulches like shredded rubber or rocks don’t add any nutrients, but they last longer. Go organic!

Compost, also known as humus, is what you get when you just leave everything in the heap to finish decomposing. You’re left with dark brown, crumbly stuff that’s natural, organic, and really good for your plants. Just be prepared to find creepy-crawlies in it when you want to use your compost. Personally, I’m not terribly fond of the big wriggly earthworms, nor the flat cockroach-like beetles and centipedes that startle me with their scuttling, but they’re part of the composting ecosystem, and I need them.

So how do you make compost?

Well, in my case, I just cordoned off an area with a low wall of bricks and instructed everybody to dump cut grass, leaves and veggie peelings in there. Some twigs and thin branches found their way in there too. Not to mention those thick strands of plastic gut that are used in the grass-cutting machines. Okay, not everybody understands what organic matter is, but I still ended up with decent compost. After all, I did my part in putting the things there and Mother Nature did the rest. 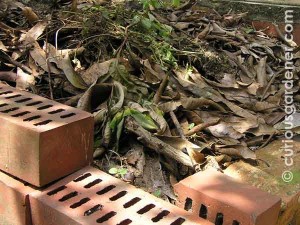 My first compost pit, soon to be retired, with a brick retaining wall

There are a couple of problems with this kind of enclosure. You have to remember to mix in the newer stuff with the old, and when you want to get to the compost, it’s right at the bottom and you have to dig through the decomposing stuff and aggravate the creepy-crawlies. It’s not surprising that the heap grew over time, because I wasn’t using much of it for quite a while. That has changed, and the plants around the garden are pretty pleased now that they’re finally getting a taste of the compost that’s been tempting them from afar.

I have since started a newer compost heap. It serves an extra purpose of filling in a bit of a depression left at the site of an old fruit tree, where the old roots have rotted, leaving a dip in the ground. Rather that cart more earth to the spot, I figured I’d let the compost do the job for me. (chicken wire and a couple of sticks and hand tools weigh much less than a wheelbarrow or two of earth!)

I started off with the idea of making a wire bin, but decided to leave one side open, for ease of dumping, and later extracting of compost. One good thing about the wire container is that air will be able to circulate more easily, and this should help the compost to form faster than in my old bin. 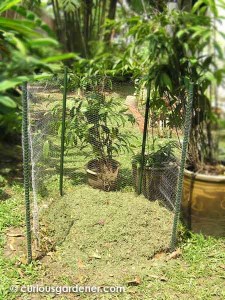 My second compost pit, camouflaged by plants so birds won’t fly into the fencing

A big concern for me, though, was that the new wire bin would pose a danger to birds. I didn’t want them to fly into and get caught in the wire, so I moved some pots of Japanese bamboo (Dracaena surculosa) to line two sides, to make it more conspicuous. I suspect that it will become a new stopping point for the birds, especially the brown shrike that stops by to stare fiercely for snacks, I mean insects, on the ground.

Another reason I wanted to make the wire compost bin was because I’d read that it can serve multiple functions. Besides the compost purpose, if you place it at the outer edge of the canopy of a tree, nutrients will feed the tree, I’m guessing, in the form of compost tea (water seeps through the pile and brings the nutrients down to the tree roots). Our mango tree should appreciate my thoughtfulness! The wire fence can also support creeping plants, and I considered using it for climbing veggies until I realized that the same insects that would be attracted to the decaying compost would also be attracted to the growing fruits. Anyway the Japanese bamboo plants look rather attractive there, so I’ll leave things as they are. The fact that the pots are heavy has nothing to do with that decision. Not at all.

If you do an online search on compost making, you’ll find that it can be a complicated process. They talk about layering green and dried matter, and monitoring the temperature, and so on. I think in good ol’ sunny Singapore, that’s not too necessary. We get plenty of heat and moisture throughout the year that create the natural conditions for making compost. I haven’t been very diligent about monitoring my first compost heap, and it worked very well by itself. Mother Nature knows exactly what she’s doing…

A word of caution, though. Don’t use compost that hasn’t finished breaking down and drying up. If it’s still greenish, wet and in big pieces, it’s not compost yet, and you may transport live seeds and pathogens that could harm your plants. Be patient and let it break down to the dry, brown/black grainy substance, and you’ve got it made …literally.