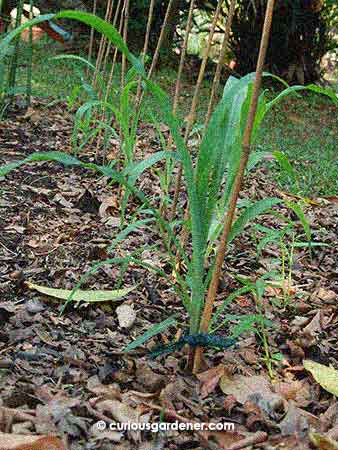 As mentioned in a previous post, I said I would tell you about the planting bed I started making before the haze hit. It’s the first time I’ve tried creating a mixed bed, and I expect I will learn from the experience. However, let me just share the intended plan for it first.

The stretch of it runs approximately north-south, so the length of it will be in full sunlight from morning until early to mid-afternoon, when the neighbour’s house and the jambu fruit tree will start to block direct sunlight.

With that in mind, I sowed white corn along the back (west) edge first, giving it a head start to grow. I eventually had to put in short stakes to note where each seedling was, and to protect the plants from our marauding dogs. The compost bed was so soft that they couldn’t resist walking all over it several times a day!

Next, straight down the middle went a row of several culinary ginger (zingiber officinale) plants transplanted from the back garden, where they weren’t growing well. Ginger grows slowly, so I’m not worried that the ginger plants will block the sunlight for the corn plants just yet. 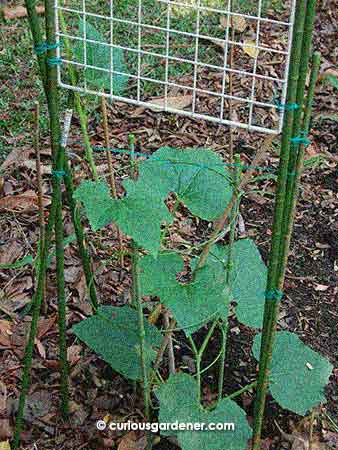 The new marrow plant in its new home

The next plant that needed a bigger home is what I call the mystery marrow. This grew in my brother’s garden and bore a couple of large gourd-like fruits, and he saved some seeds for me. I don’t have a name for it, nor do I know what it will be like, because he didn’t show me the fruit in person. The plant resembles the winter melon vine, though, with similar cucurbitaceae leaves and hairy stems. It took almost a fortnight for the seedling to settle in to the new location, then it began growing quite rapidly. I initially protected it with a small tomato cage, but at the rate it was going, I had to quickly put up higher climbing supports. I’ll share that process in another post… Suffice it to know that this vine is at the south end of the veggie bed where it is now growing vertically. 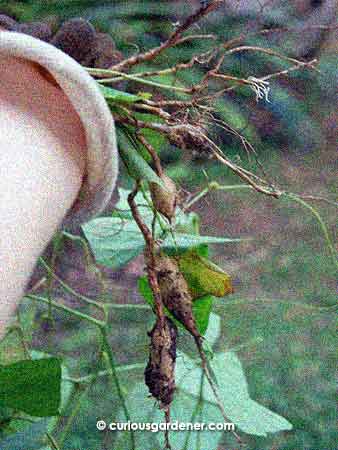 The bangkwang or jicama plants that were growing wild in the garden. It’s good to let plants go to seed and disperse them so you find little surprises like these!

The front of the bed looked rather empty, so I tried putting in lemongrass for ground cover, but that was during the week when the haze was worst, and it looks like those plants may not make it. Instead, I turned to our prolific kangkong plants, taking some cuttings from the former kangkong tangle. To give the cuttings a fighting chance, I put the stems in water for a few days so they could grow more roots. Boy, did they ever do that! And they barely registered any shock when I planted them in the bed a few days later.

And while I was procuring the kangkong cuttings – which were growing above the bangkwang patch – I discovered several young, wild bangkwang (or jicama) plants that already had tubers forming. Of course I decided to add them to the veggie bed, too! They went in between the rows of corn and ginger. I expect these plants to provide good ground cover, and to probably start twining up the corn plants as they mature. However, as an old family friend once shared with me, don’t let the plants grow long stems because they will expend energy on flowers, pods and seeds instead of developing the tubers; keep the stems at a shorter length, and you should get bigger tubers faster. I hope that works.

The other (north) end of the bed got our first new burgundy okra plant. It still looked so empty, so I went hunting for other suitable candidates to add. That’s how the chilli plant that had been growing quite well in a recycled PET bottle got added to the front of the bed. A second chilli plant went in next to it, and I now have to wait for other plants to grow from seed. 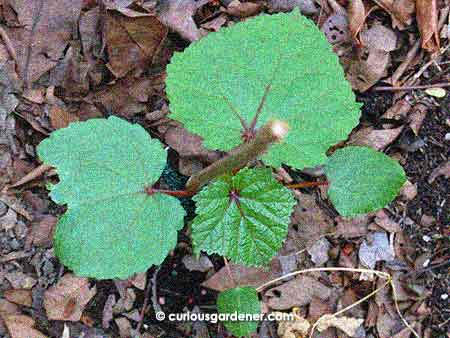 The young burgundy okra plant. I can’t stop appreciating the artistic red leaf veins and stems whenever I look at the plants! 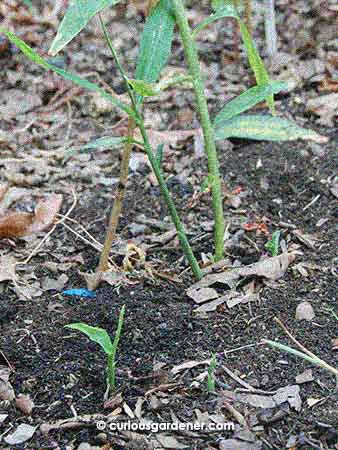 Some of the ginger plants… 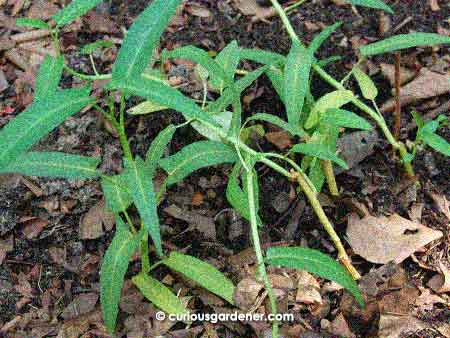 It may sound like there are a lot of plants crammed in there, but it’s actually rather empty-looking right now because they’re all still young. You may wonder why I have this hodgepodge approach to the veggie bed. Well, call it a combination of what I’ve learned about permaculture and companion planting – but my efforts are purely experimental and very novice, and limited by what is growing now. I’d like to say that I could plan better in the future, but you can’t always get seeds to germinate just because you sow them – because believe me, I’ve had rotten luck over the last two months. Was it the weather? Should I have tried lunar planting? I don’t know, but at least things are growing again. Trust me, there should be more to talk about very soon…