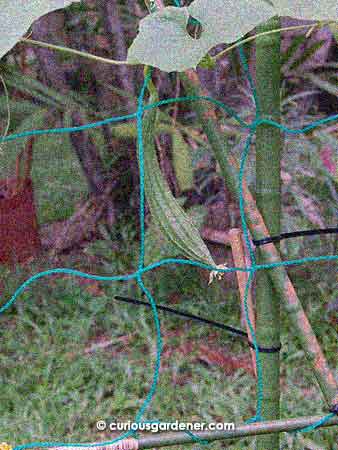 The angled loofah fruit is just over 8cm long now.

I have been waiting impatiently for the angled loofah plants to start bearing fruits. These plants were grown from seeds given by Grandpa Weed, and have taken quite a while to mature.

The seeds germinated in February and were planted out in the garden in March, when they were about 3 weeks old. Since then, the plants climbed their way up the trellis, draped over and started branching out.

As usual, the male flowers appeared first, eventually followed by female flowers. I knew that the first few would not set fruit, but it has been well over a month, and each of them aborted – and in the case of a couple, got broken, I assume, by a hungry bird. I don’t know which one to blame, though – maybe the green parakeets? I was beginning to think that the plants were homesick for the climate of Grandpa Weed’s garden.

Well, as usual, when the first fruit set, the event slipped my notice until I spotted the young fruit near the bottom of the trellis. It was already well underway, at about 8cm long. I hope this is the start of a nice, long fruiting season! As with our earlier experiences with growing the angled loofah, the plants will set fruit, then take a break before fruiting again. It’s just the way it happened. Let’s see if Grandpa Weed’s variety of the angled loofah is any different!