When I first planted culinary ginger, I knew it was going to be one of those plants that you’re supposed to plant and then leave to its own devices. As a novice back then, I naturally checked it every day and ooh-ed and aah-ed over every new development. After reaching the first harvest, I’ve managed to curb my enthusiasm and leave it be. I guess the fact that I’ve only posted about it once or twice a year should testify to this.

The lemongrass has overtaken the ginger that was growing in front of it (see it bowed over in the lower right corner?) and was doing the same with the variegated dracaena plant.

Well, I’ve been doing some tidying up around the garden, and found that the lemongrass had overtaken the main ginger patch. Yes, there were a few ginger stems poking out along the edges, but I figured the rest of it must have died off from lack of light. 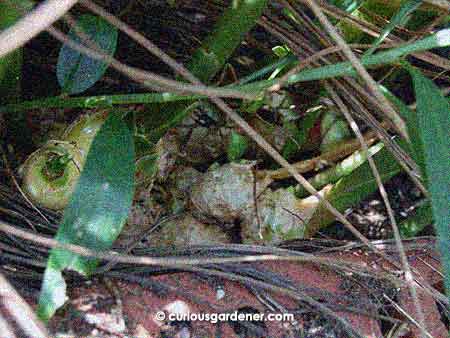 The nice cluster of ginger rhizomes that was growing beneath the lemongrass. I see a number of growing buds that I can take to propagate.

Surprisingly, there was more than I anticipated, growing aboveground, perhaps in a quest for more light. I will have to tend to that soon, but have been laid up with the flu, so was not able to do much in the garden this weekend. 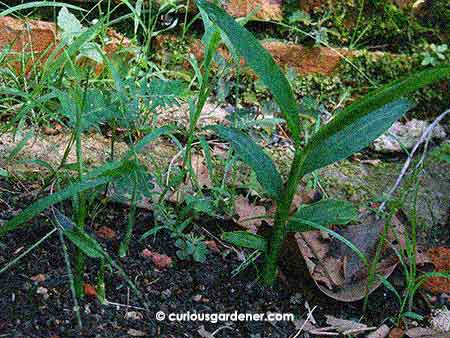 The new shoots showing strong growth. It’s a pity they’re located behind a row of okra plants, because that makes weeding difficult. Hopefully you can distinguish the ginger in the foreground from the grass and weeds…

The ginger I had been growing in a pot also had a few rhizomes growing above soil level, which I recently took and replanted in the space behind my okra plants. The okra bed had been reinforced with compost prior to planting, and I thought the ginger would appreciate that. From the way the new ginger has been sprouting, I’d say that they like the soil very much! I had broken the rhizomes into smaller pieces with one or two growing buds on each bit, but the rate of growth seems faster than with the previous plants. Interesting. I learn more with each new planting…