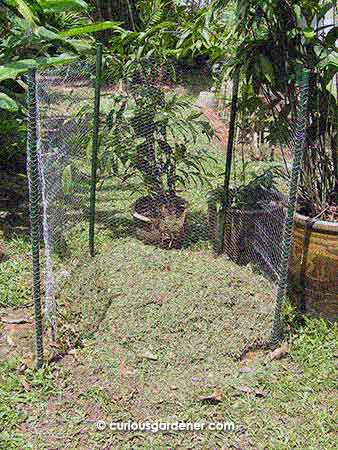 My second compost heap in the early stage – a 3-sided cage that our first mini bittergourd vine eventually climbed all over.

One of the things I regret having not done enough over the years is recycling plant waste in the garden. Contract gardeners are very efficient at cutting and clearing so that you’re left with a neat, pretty garden. However, they also throw out all the plant waste – which is a shame when you consider that you then go and buy compost to enrich your garden, when you could have just put most of the plant waste into a compost heap to decompose over time. If you’re a neat freak, you may not want one around – but why throw away what will, over time, be beneficial for your plants and the environment?

Before I reached the stage where I decided to buy compost, I attempted to create a couple of compost sites. The first was a simple brick enclosure that we threw grass clippings into. The contract gardeners understood those instructions and deposited all the cut grass there, and it was a success. The second was a little fenced-in area where I attempted to create a proper “lasagna” compost heap – except that our gardeners thought it was a waste pile and threw most of it away… Argh!

Well, now that we are currently free of external gardeners, I am looking forward to recycling more in the garden, and I finally have some means to reach that goal…

…by using the lawn mower to cut fallen leaves into smaller bits that I can use as a nice, organic mulch that will eventually decompose and fertilize the garden. 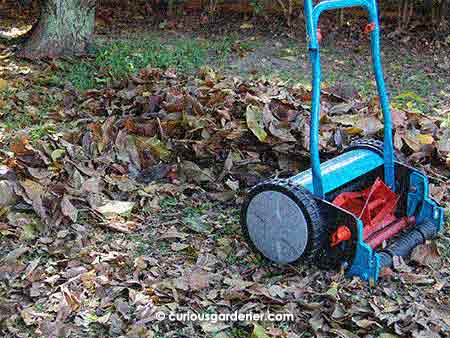 It’s a little tedious using the manual lawn mower to shred leaves because you have to repeatedly go over the same patch of leaves in order to cut them down to a nice, small size; however, since this is also part of my new exercise regime, I’m not going to complain!

Fallen leaves are an issue because we have a few fruit trees that shed leaves several times a year. I tried composting them in the past, but they took longer to break down than green waste, and I didn’t consider it a very successful attempt.

Then, when we visited the GreenBack Compost production facility in 2011, I realized how all plant waste could be used – branches, leaves and all – when well shredded. Sadly, I don’t have the means to chip or shred woody branches, but I can at least do something about big leaves now. It would be nice to have a heavy-duty shredder, though, because we regularly prune plants such as the dracaena and Peacock trees, which have thicker stems. Oh well, at least we’re moving in a better direction now.