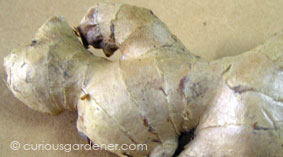 Ginger is one of the most common ingredients in cooking all around the world. It spices up all kinds of foods and drinks, both savory and sweet. It has been used for centuries in many cultures as a spice, snack or for medicinal purposes.

Technically, ginger is a rhizome, not a root. The part of the plant that we eat is formed underground, with roots growing out of it, and shoots that grow above ground. It’s just a common assumption that since it grows in the ground, it’s a root. Not.

Here in Singapore, ginger is used often in cooking, so I figured I’d give growing it a go.

How I started growing ginger 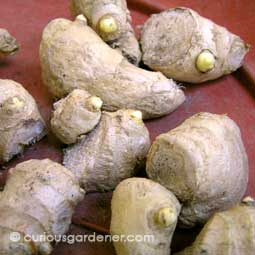 My first attempt at growing ginger was in idle fun. We had a piece of ginger that had been kept too long and had started sprouting. I placed it on the surface of an unoccupied flowerpot to see how it would grow. When the sprout turned green and the first leaf began to form, I thought it would be better to plant it in the ground. Unfortunately, the roots broke off from the top of the plant when I was attempting to transfer it.

This just made me want to try again, so I bought a packet of old ginger from the supermarket and kept the rhizomes until growing buds began to appear. To maximise the number of plants I could grow, I cut each rhizome so that there was one good growing bud per piece.

You can have more than one bud per piece of ginger planted, but I thought I’d go with just one. That could be a risk, but I didn’t think it would be, really.

After cutting the ginger into smaller pieces for planting, I kept the pieces in a dry, dark place for a couple of days until the exposed surfaces of the ginger had dried. That also gave the buds more time to grow.

While waiting for that, I checked the locations where I wanted to put in the plants, and decided to mix in some compost to enrich earth that was on the sandy, clayey side. You’re supposed to do this a few weeks before planting, but, hey, I’m impatient…

When the rhizomes had dried suitably, I followed instructions from several sources and planted each piece of ginger between 8-10cm deep, growth bud facing up, with a space of 15-20cm between each plant. It took 2-3 weeks for the first plant to make an appearance. 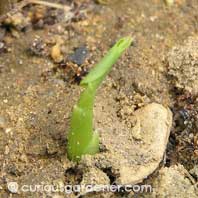 Since I had so many candidates for planting, I decided to experiment with different locations. The first lot was planted directly in the ground under the shade of a mango tree – about 1.5m away from the tree trunk. They get some sunlight from morning through noon. I had a 50% success rate with the sprouts (so far).

The next lot (I waited for suitably sized growing buds first) was sowed a week or two later in a sunny location. I had read that ginger does not like full sun, but since we live in the equatorial region, I thought I’d see how they do in our climate. To my utter surprise, I had a 100% success rate with the sprouts. 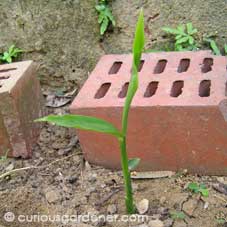 I also have one plant growing in a pot, as a test for friends who live in apartments and who complain that they can’t grow such veggies. That was one of the first rhizomes to sprout.

My final lot was planted in the shadiest location of all under the mango tree. That spot gets late afternoon sunlight. It’s too soon for sprouts to appear yet, but I’m keeping an eye on the place.

The oldest plants are a week old now. It supposedly takes 8-10 months for the plants to mature, so the watching and waiting goes on…