Since the end of last year turned out to be a bad time for new and young plants, I had to try to sow new seeds after the new year. It felt like trying to get a lawn mower to start – you yank the cord, the engine doesn’t catch; you yank a few more times before it finally starts running smoothly.

In other words, the seed sowing didn’t go very well, but we do finally have a few new plants growing. 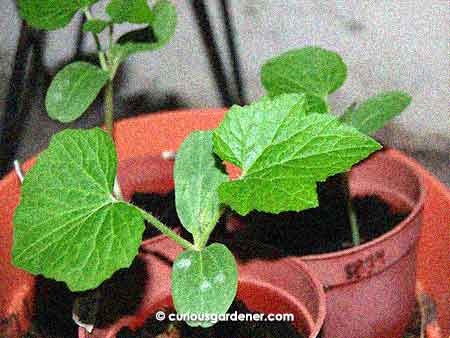 There’s the mystery marrow plant that I was given seeds of – mystery because the seeds were saved from a harvested fruit in someone’s garden. So, I have no name for it, and only know it’s similar to winter melon, and can grow more than half a metre to a metre! The seeds weren’t cooperative and I had to sow them 3 times before a few germinated. They’re still babies now, and I’d better label them properly because they look just like any other cucurbitaceae plant to me. 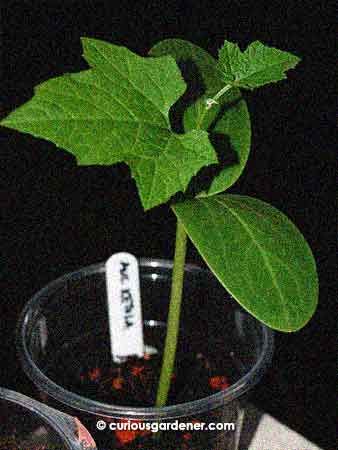 One of the new loofah seedlings.

Identifying the marrow plant is important because we also have new arrivals grown from Grandpa Weed’s angled loofah seeds. Our last plant died out a few months ago, so I hope these grow and mature sooner than later, because I miss harvesting loofahs from the garden. 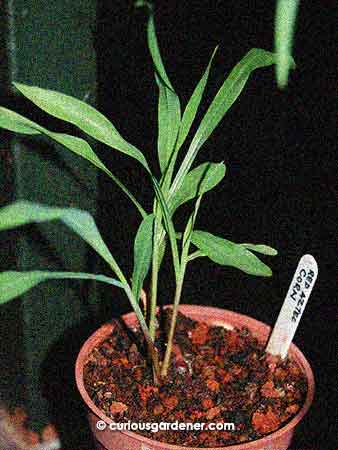 Five Red Aztec corn plants have grown from the seeds saved from our plant. I was hoping for more, but I’ll take what we get. They are still young and will be kept in individual pots until they mature a bit more. I may sow the remainder of my Red Aztec corn seeds (the few that are left) soon to keep these plants company. 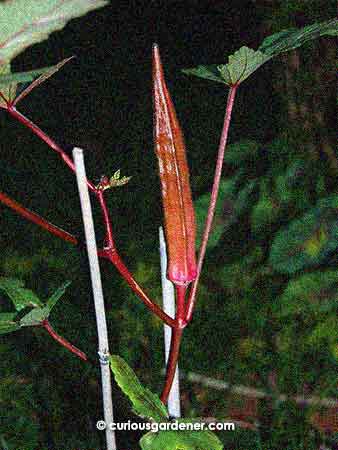 First burgundy okra of the year.

The oldest burgundy okra plant has reached maturity and has started fruiting. I guess the younger two plants will need a week or so to catch up in maturity since they were hobbled by snails more than once, but they appear to be growing well so far – touch wood!

Also in the works are long bean plants and green okra plants. With all the climbers and creepers growing, it looks like I’ll have to start putting up more trellises soon – but I don’t mind, because I want the thrill of harvesting veggies again, and soon!