I had resigned myself to writing a post entitled “Corn kosong” (“kosong” meaning “empty” or “zero” in Malay) because the first couple of Red Aztec cobs that I tentatively harvested were just that – empty. Yes, there was the little spongy thing in the middle that looked like young corn that the kernels were supposed to grow on, but that was the only resemblance to corn. 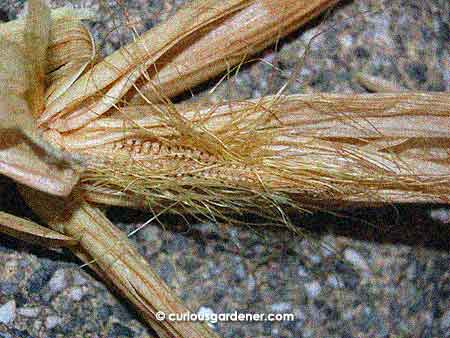 One of the many empty corn cobs. I guess I need more practice with hand-pollinating.

So, this being an extra-long weekend for us in Singapore, I thought I’d better start doing some spring-cleaning in the garden, so to speak. The dried corn plants were crying for attention, so I went to dispose of them. However, I wouldn’t be the Curious Gardener if I just threw the plants out, would I?

No, I had to pull off each dry and very empty-feeling cob and pull each apart to see what was inside. Well I’m glad I did, because one of them gave me a surprise… 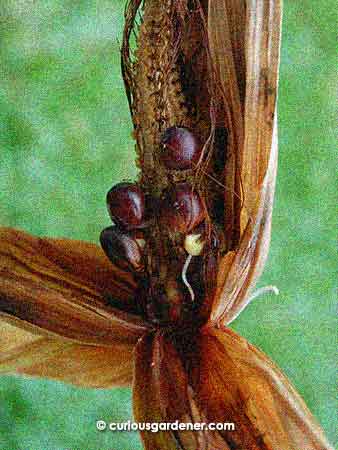 The few corn kernels – two of which had already germinated.

There were actually a few formed kernels!

And they were RED!!!

After Novice Gardener’s experience, I held absolutely no hope for my Red Aztec corn. Yet, here were almost ten juicy, red kernels near the base of a cob.

Yes, it sounds quite pathetic, but I’m consoled that my efforts at hand-pollinating were not completely wasted, and that the corn ran true to form, in that it was red.

Since two of the kernels had already started to germinate, I used that as my cue to use these to start a new crop, and hope that maybe since they’re second-generation, they may be more hardy than the first lot. What can I say? I’m an eternal optimist…