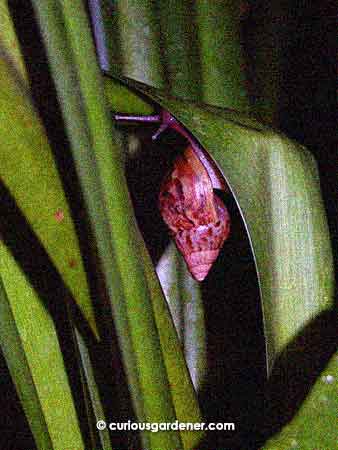 A garden snail in one of the usual haunts, the spider lily plant patch.

Yes, I usually rant about them, but last week when I was out checking on my plants, I felt a bit bad when I realized how many empty snail shells were scattered about. There were several clustered in the leaves of the spider lily plants, that had probably sought refuge in the shady and normally succulent leaves. I guess the start of the dry monsoon season cut down their food sources and they had no choice but to starve and die out. Even the lawn has been drying out rapidly. So for once, my sympathies lay with the garden snails.

If we get these changes that affect the snails so badly, then why do there seem to be so many of them around?

Well, once in a while, I come across a cluster of tiny, round eggs laid under bricks or potted plants out in the garden.

Did you realize that snails are able to burrow in loose soil? I didn’t until I saw one half buried in one of my planters. I thought it was dead, but it wasn’t! 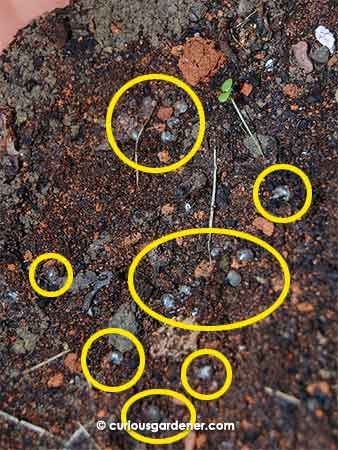 You probably won’t be able to identify them, so I’ve helpfully circled the baby snails in this photo.

So, this is why my fellow organic veggie gardeners and I occasionally find a whole “plantation” of seedlings or young plants wiped out mysteriously, almost overnight. It’s because there are dastardly snails literally lurking in the soil.

Today I was doing a little “housekeeping”. When my potted plants die out, I tend to stack up the unused pots – with soil inside – in bigger pots, waiting for new plants to occupy them. When I moved one small pot, I saw a cluster of little round things that I assumed were snail eggs. I was half-right. They were actually baby snails hiding under the smaller pot! By then time I wandered back with the camera, they had already started scattering in search of somewhere dark and cool. These things are garden ninjas, I tell you! They’re quiet and fast, and deadly to some of our plants…