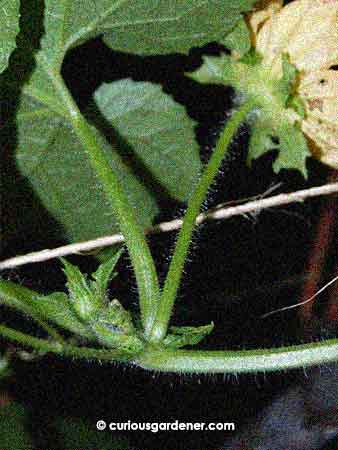 The first male flower (top right) has bloomed and there are already two new buds forming at the same leaf juncture!

I must be doing something right, because the winter melon plant – the current oldest one, anyway – is exceeding the growth of its predecessor. The plant has produced a few offshoot stems, which the first plant didn’t, and now instead of seeing just one male flower per leaf juncture, I’ve noticed several buds starting to form in the wake of the first flowers!

This is the first time I’ve seen this happen with the winter melon plant – which is not surprising since this is only my second growing season with the plant.

The first plant simply grew a single main vine and had just one flower at each leaf juncture until it set fruit, after which, it eventually died off. With this second plant, I wanted to do better, so I did more planning and preparation. This plant began its life in a flower pot before I changed my mind and decided to plant it directly in the ground. Before transplanting it, I prepared the ground with a lot of matured compost. I guess it worked, because the plant is showing its appreciation now!

To be perfectly honest, the plant isn’t completely without problems. What plant ever is?

Powdery mildew affects some of the leaves, and some stems sort of run out of steam – the leaves don’t grow too big and curl up into themselves. I’ve found that aphids like those curled leaves, so I’ve learnt to be a little ruthless and remove those not-so-healthy stems.

That probably gives the plant the boost it needs to focus energy on developing the more healthy stems, so this has been a lesson well learnt. Has it contributed to the multiple buds? Maybe. Or maybe the plant is supposed to have bloomed like this but the first plant wasn’t strong enough to do this. I guess I’ll have to grow more winter melon plants to find out!