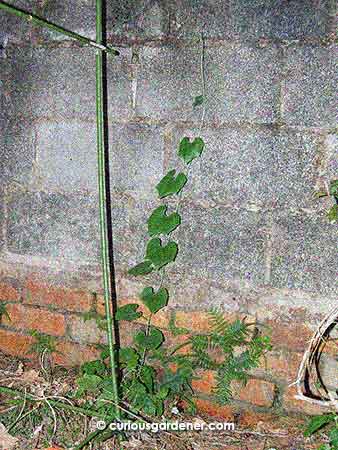 The snake gourd plant niftily climbing up the rough wall.

My green snake gourd plant looked like it was coming to the end of its growing season. Branches of it were dying off and fruits weren’t forming completely. So, I decided to start pruning the dead and dying stems to see if anything would be salvageable. It didn’t look like it, although I’ll wait to see if the thick main stem will sprout anything new now that the weak stems have been removed.

The funny thing is, after clearing the trellis, I discovered a new plant that had sprouted from one of the fruits that I had left to decompose next to the trellis. The vine was already over a metre long, and was climbing its way up the wall. I had no idea that vines with tendrils could be such efficient rock-climbers!

The only problem with this is that when it reaches the top of the wall, the fence with our neighbours begins, and they don’t appreciate this plant growing there. I don’t blame them because the first vine was quite intrusive and climbed all over their plants, almost smothering some. Since I don’t want to let this new plant go to waste, I think I’ll transplant it to elsewhere in the garden. It’s funny that the snake gourd didn’t want to give up its presence here!