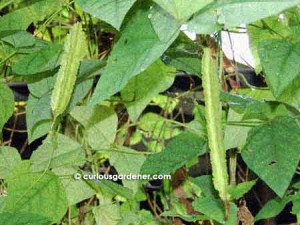 You know I’ve been complaining for months about the lack of beans on our four-angled bean vines. I had planted six seeds and all sprouted and grew, so I had great expectations of a bountiful crop.

However, weeks and months went by and we only got the occasional bean. Besides the poor harvest, my tardiness in weeding led to our gardeners severing three of the vines when cutting the grass.

I persevered, continuing to tempt the plants by using different fertilizers and organic compost. Nothing outstanding happened. I even had my fingers crossed that the rainy weather would induce more fruits, but again nothing changed noticeably. 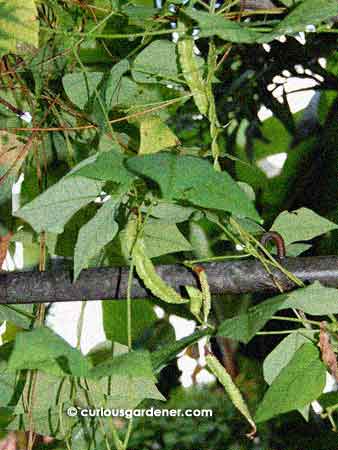 What we hope to keep seeing - bunches of beans. Do you see the 4 beans in this picture? They're of different sizes - big, medium and small!

A few days ago, I noticed a half grown bean midway up the vine. It’s normal to get the occasional winged bean. Then, I noticed another one right at the top of the trellis. It was rather big, so I decided to get the ladder out to harvest it.

Then, since I was up there, I decided to start stripping away the dead vines – the ones severed by the gardeners. There was quite a lot to remove – including a dried bean that I kept for the seeds inside – and when I was done, the vines looked healthy and green.

While admiring the foliage, I suddenly noticed yet another half grown bean … and then a baby one, and then another! With shock, I realized there were beans forming in several places, and I was astounded!

Obviously, something had happened recently to have caused this sudden setting of fruits. Mind you, bean flowers have bloomed over the months, but they’ve tended to abort. That was why I’d been trying different fertilizers every week or fortnight. The last one I remember applying was blood and bone – a new fertilizer in our garden that I decided to try because it claimed to help microbial action of the soil and to boost plant growth. Maybe it was the thing that tipped the scales and got the beans forming, but it was likely a combination of everything – a happy accident that I can’t remember the formula of. I just hope this is a lasting effect. Maybe now our winged bean vines will live up to the reputation of being prolific producers!