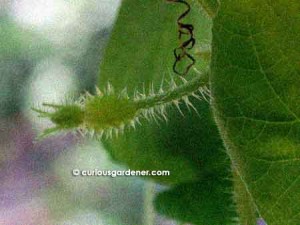 Female kiwano flower bud with the miniature fruit behind the bud.

When growing fruiting vines, what a gardener wants to see are – not just any flower, but female flowers. Male flowers are normally pretty, plentiful and have their uses, but those more rare female flowers bear the promise of things literally coming to fruition.

So you can guess that I’ve been avidly scanning our kiwano trellis on a daily basis, particularly after it started budding with male flowers – and once it started budding, it went all out, and there are many cute pale yellow flowers adorning the trellis today. Of course once the guys appeared, I wanted the gals to join the party. I was so anxious that there were a few false alarms – swelling protrusions on the stems that I hoped were female buds, but were just more leaf growth. And when the female buds did appear, as with most first attempts, they aborted.

As is the usual case – with me, anyway – the first successful female flowers managed to slip past my surveillance. Blame the spiky, scratchy foliage of the kiwano vine for that. I so hate getting scratched by the plant that I don’t look as thoroughly as I could, and since the vine is extremely prolific, I avoid touching it to peer under all the foliage. It’s reached the stage where I’ve started pruning the more adventurous stems trying to lean out and attach themselves to anything around the trellis. And who knows, maybe the pruning has startled the plant into finally producing proper female flowers. 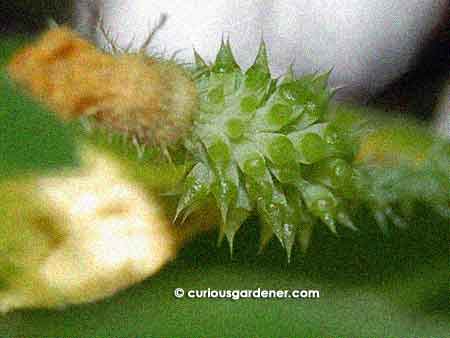 A very close look at the baby horned melon shows what looks like juicy fruit pips, but you can bet those spiky tips are going to hurt!

As you know, the kiwano is also known as the horned melon, and the tiny fruits behind the female flowers are showing evidence of this. Up close and personal they look like they’re covered with juicy green pips, but each “pip” has a sharp looking point reminiscent of our local favourite fruit, the durian. I’ve tested the kiwano fruit tips – gingerly – and yes, they are a little sharp. They could be worse, though. Anyway from the picture of the kiwano fruit on the seed packet, the “horns” should spread out, so it should look less durian-like when it matures.

So the good news is, the fruits are on the way! Time to start looking for recipes and serving suggestions…