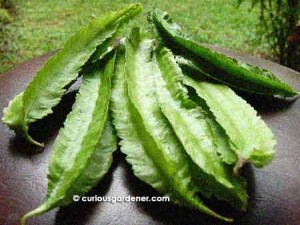 Our biggest harvest of winged beans so far!

It’s interesting to keep track of what has been thriving, even though it sometimes sounds repetitious. However, mentioning everything every month helps me to keep track of how long the plants keep producing, so do bear with me and my monthly summary…

Well, I have to start off with the four-angled beans. As mentioned a few days ago, the vines suddenly decided to keep setting fruits and we’re looking forward to a regular supply of these beans (knock on wood!). The more prolific they are, the younger we can harvest them to enjoy them when they’re really tender!

Our first bangkwang – or jicama or Mexican turnip – was also harvested this month!

The angled loofahs are still coming along. The vines still go through phases of producing fruits, then resting before starting to produce female flowers again. I wonder how many cycles they’ll have before they stop?

Green okra plants are doing well. I have a few plants of different ages to try to keep the supply going.

The burgundy okra plants, however, appear to be dying out. I’m not sure if it’s their normal life span or if they don’t like where they’ve been growing. However, the new leaves have been getting smaller and smaller, despite being fed compost and fertilizers, so I suppose their end is here.

The new, regular long bean plants have started fruiting. They’re quick to do so – once they reach the top of the trellis and start hanging over, the flower buds seem to start appearing. These, however, grow a bean at a time, as opposed to the thin long bean plants that produced maybe up to 4 beans per stem. 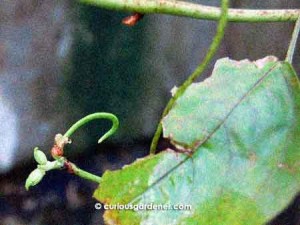 The thin long bean plant found its second wind and started setting fruits despite the sad state of its foliage.

Speaking of the thin long beans, the plants appeared to be dying out. I thought they were at the end of their life span, so started pruning the plants to clear the trellis. The usual decomposers were present – caterpillars, snails and beetles – so I believed the plants were through. A couple of things happened – first, I was interrupted in my pruning efforts, so parts of the plants were left on the trellis; second, I put fertilizer on some shrubs also growing at the base of the trellis. Next thing I know, the long bean vines started growing new leaves and flower buds! Right now, new beans are forming, so perhaps I was mistaken about the life span of these plants!

I’ve consolidated many of my kangkong plants into a single planter as opposed to the hanging bottle-pots. They actually do well growing in the recycled PET bottles, but I’m concerned because they get root-bound very fast, but more on that another time.

Speaking of recycled bottles, they don’t seem to be working with my chilli plants. A few months ago, I managed to grow some chilli plants from seeds from a fresh chilli. I planted each of them in individual recycled bottles that I had cut very close to the top so that they would be deep, thinking that they would be able to grow better than in shallow pots. Well, the plants seem to be indicating that they need to spread the roots sideways as well as downwards to grow well, because they’ve grown upwards more than sideways, and are not able to set fruits even though they do flower and are growing in good, rich soil.

New additions to the edible collection are Chinese parsley, coriander, Chinese chives and dill – all grown from seed. I haven’t had the best track record growing herbs, so we’ll see how these go… 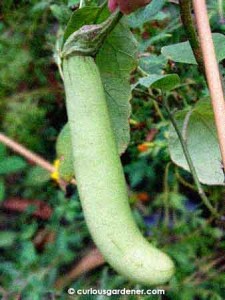 The first green brinjal - not teriffically long at less than 20 cm.

Also new to the harvest category is the green aubergine. We’ve just harvested the first one. As with first fruits, it wasn’t very big, but as the skin was starting to lose its sheen, I felt it was better to harvest it than leave it just to see if it would grow bigger.

After taking a bit of a break, the purple brinjal plants are starting to fruit again. The plants growing in the ground are looking especially healthy and more tree-like while their counterparts growing in pots still look plant-like.

Last but certainly not least, we have the Kiwano and winter melon plants currently growing. I expect we’ll have fruits for the former in December since the female flowers have made their appearance. As for the winter melon, that’s still a journey in progress.