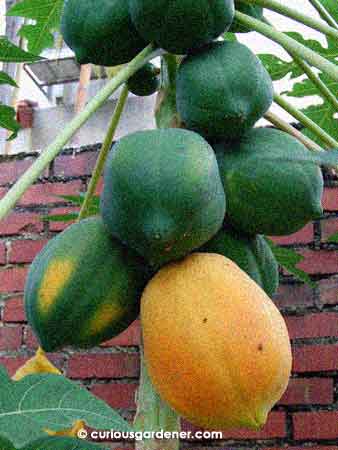 The biggest papaya prior to harvest.

We’ve been enjoying eating the Red Lady papayas for a few weeks now. The fruits ripen at the rate of perhaps one fruit per week, and there have been only two incidents with the birds so far – once, it looked like a bird landed on the fruit and tried to grip with its claws, because there were a few parallel scratches in the pattern of a bird’s foot.

The second incident was when a bird managed to peck once into the fruit before I came to harvest it. Silly bird – it should have eaten faster because I aim to deny them these fruits…

Well, this second incident involves the topic of this post – the largest Red Lady papaya that has grown here so far.

I had been watching with great interest as the fruits grew on the tree. They were such a cute, round shape – and of course, they have a place of pride in my heart because they’re special commercial grade plants. So, it was with interest that I noticed one of the fruits growing obviously bigger and longer than the others, and I was intrigued. 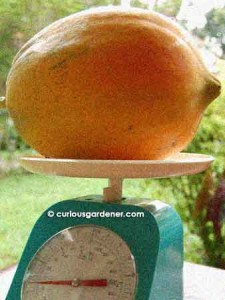 Displaying the heaviest weight of all the Red Lady papayas so far - 1.65kg!

The previously harvested fruits were all well below the 1 kg mark – anything between 600 to 800 grams. They were small but packed with flavour. Now, this fruit weighed in at a hefty 1.65kg! That’s more than three times the weight of the first harvested fruit, which was just below 500 grams.

It’s no surprise then that the bird that pecked into the fruit was as attracted to it as I was!

So far, though, our Red Lady papaya fruits have not conformed to the description on the seed distributor’s site. They have been rounded rather than short-oblong (until this fruit), their flesh is orange rather than red, and they have been seedless so far. But they have been sweet – very, very sweet…

I can’t complain about the lack of seeds any more as this latest fruit, finally, has some seeds. If I had to guess about this, I’d say that the flower for this fruit was blooming at the same time that our male papaya tree had finally started flowering, and pollination was able to take place.

The first Red Lady papaya to have seeds.

This sure would explain why the earlier fruits had no seeds, but not why they developed into fruits. According to the seed distributor site, that fruits on hermaphrodite trees are slightly elongated. So, I’m rather confused, because our fruits have been more round than long, so that should make the tree female. Right? So how did it produce fruits before the male tree matured?

However, I’m not going to complain about having fruits. Fruits are good , and we’re happy to get them.

And no, we won’t bother trying to plant the seeds from the fruit, because the Red Lady papaya is a hybrid, and hybrid seeds do not carry over all the characteristics of the first generation of the plant. Such is the price of dabbling in genetics.