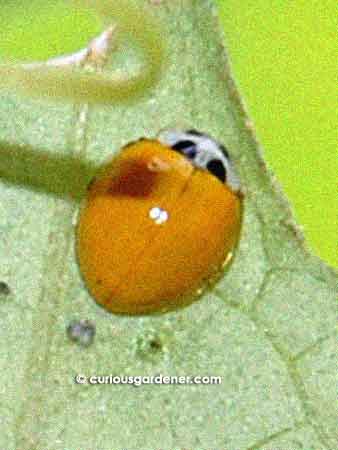 First view of the intriguing yellow ladybug on the underside of the leaf of the angled loofah plant.

I have become such a ladybug stalker that my eyes immediately zoom in on every tiny round bug or nymph-like creature on the plants as I roam about the garden.

Just last week, I saw two yellow ladybugs on the angled loofah vine. I was thrilled, because I thought they were newly-hatched ladybugs. Arming myself with the camera, I kept visiting the plant every half hour or so, hoping to catch the process of the colour change in camera pixels. Unfortunately, it was already late evening, and after two hours, they didn’t seem to undergo any drastic colour changes. Disappointed, I had to retire with the dying light and hope they would still be there the next day.

There were several very fine passing showers the following morning, so I didn’t get out to the loofah plants until late afternoon. I was pleased to find the two ladybugs still around, and they were still bright yellow. 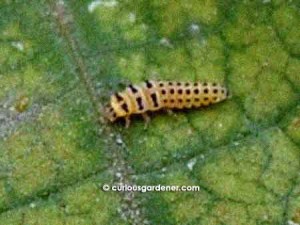 A more advanced nymph - the younger ones are skinnier and more colourless.

Before I could ponder more, I noticed some movement on another leaf. There were a few creatures that looked like ladybug nymphs, but they were curiously different from those on my brinjal plant. The shape was the same as the other nymphs I had seen, but these were a golden-yellow colour, with black spots and stripes on each segment. They also looked somewhat translucent and squishable, if you’re into squashing juicy bugs.

At that point, my brain put the yellow ladybugs and yellow nymphs together and came to the conclusion that this was a different variety of ladybug – yellow ladybugs! In fact, I’ve also seen dark brown or black beetles shaped like ladybugs – so it stood to reason they could all be cousins, right? Whether red-spotted-with-black, black or yellow, they’re all the same general size and shape, and probably from the Coccinellidae family of beetles. 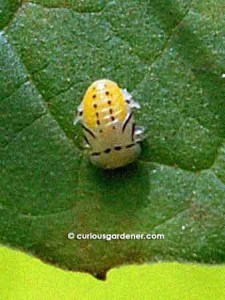 The yellow ladybug in pupa stage - for some reason, the cocoon reminds me of the Power Rangers...

Now, the black nymphs on the eggplant plant were feeding on yellow aphids, but there was no such infestation on the angled loofah plant, yet the nymphs were running around excitedly and pausing periodically, looking like they were feeding on something on the surface of the leaves. There didn’t appear to be any other creatures that I could see, but what there was a lot of was powdery mildew (no thanks to the wet weather). From my online research, I’ve learned that besides soft-bodied insects like aphids, some ladybugs also eat pollen, fungus and plants. So, maybe this is why the yellow beetles were on the angled loofah plants and nowhere else that I can see – maybe they like the leaves or the combination of mildew and leaves. I’ve been checking the other plants with mildewed leaves but don’t see any yellow bugs, so this is likely a plant-specific attraction.

The final confirmation of these beetles’ ladybughood was when they started going into pupa stage. Once again, I saw the same type of “prawn-like” cocoon formed, with the “tail” stuck on to the leaf surface and the fat end looking like some sort of armour. This cocoon, like the nymphs, was yellow with black patterns and had some translucent edging here and there. It reminded me so much of the Power Rangers or Transformers! 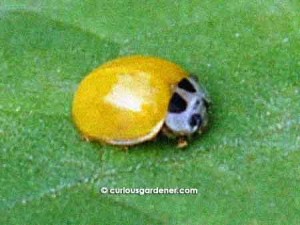 Side view of the yellow ladybug - they all seem to have the same two pairs of black dots on the white part of their bodies.

These yellow ladybugs really seem to like the angled loofah plant, because there are currently quite a number of nymphs at various stages of development, as well as cocoons that are occupied or already discarded. If I weren’t such a fan of them, I’d probably be itching to kill them off because there are so many of them. More than two of the same bug are too many, in my opinion!

The good thing is, they don’t seem to be causing harm to the plant. On top of that, if these creatures are really feeding on the mildew on the plant leaves, then I am even more glad to have them around – and less resentful towards the white-gray covering on the plant leaves. This just shows once again how things in nature that we consider nuisances become boons when combined with something else – or just how nature balances itself out. 8)