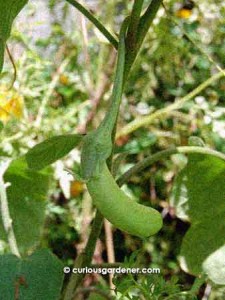 I sowed seeds for both green and purple aubergine or brinjal plants at the same time, but for whatever reason, the green aubergine plants lagged way behind the purple ones. The purple plants grew, flowered and fruited faster, with the first purple brinjal making its grand entrance in early September. Now, finally, I can unveil its green cousin, the baby long green brinjal!

Being of the Solanaceae family, the flowers resemble those of chillis and tomatoes – and look identical to the purple eggplant flowers in every way that I can see. This caused me a huge headache because I wasn’t sure which plant was which variety while they were growing. But, now that the first fruit has started growing – and it’s staying a nice pale green, unlike the purple brinjals that turn and remain purple after the initial growing stage – I finally know for sure that we have at least one green brinjal plant growing.

Flower of the green eggplant - looks exactly like that of the purple eggplant to me!

The funny thing is, I had planted a few yellow cosmos plants near this pair of brinjal plants to act as pollinator attractors (besides that, they’re pretty plants!). The cosmos plants grew so fast that they soon towered over the two aubergine plants, and then when the rainy season came along, the cosmos plants naturally leaned over because they were so top-heavy, and covered the brinjal plants.

Now, if you think about plant psychology, this may have helped, because the aubergine plants may have felt threatened and decided to finally take action to reproduce themselves! Whatever the reason, I’m thrilled to finally start seeing fruits of my labour – and I’m interested to see exactly how long these fruits will grow to be. After all, the short purple brinjals were drattedly short. Will the long green brinjal live up to its name?