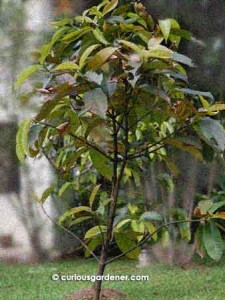 The mangosteen tree a year ago - slow and scrawny.

Two years ago, we sadly said goodbye to our old apple mango tree that had been infested by wood-boring beetles. My dad, the fruit-grower of the family, declared that he wanted to grow something less troublesome, and chose to replace the apple mango tree with mangosteen trees. According to him, very few pests bother these plants.

And so we bought three grafted plants to fill up the area covered previously by the mango tree. I know three sounds like a lot, but besides providing fruits, trees in our garden are usually kept to provide shade and privacy. Losing the nice big apple mango tree so suddenly gave a clear view into our garden, and the immediate exposure was odd.

The trees were planted in a row at the distance advised by our friend at the plant nursery – about 2 to 3 metres apart, because they’re grafted trees and won’t spread out much (he said). Not being a fruit-growing aficionado, I just followed the advice when planting them. They were less than 1.5 metres tall when we got them. 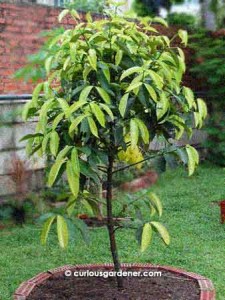 The mangosteen tree a year later, after the compost and bonemeal treatments - obviously growth has been stimulated.

Unfortunately for the trees, my dad was unable to do much garden work after that, and they were left in my “care”. That meant they were fed whatever fertilizers that my other plants got – some bonemeal, chicken poop, sheep poop and phostrogen – when I remembered to administer them, and green mulch when the lawn was mowed. The plants didn’t die, but neither did they grow drastically.

When I reflected on their growth earlier this year, I realized they were likely doing what our bauhinia plant did – they probably used all that time to establish their root systems in the new environment and didn’t have much energy left over to branch out and grow above ground. Determinedly, I began administering stronger doses of fertilizer, and buried dead fish from our aquarium at the base of the trees in the hopes that the nutrients would spark their growth, as happened with our bauhinia plant. When I got my ton of compost, I added a layer of that as mulch from the stem of the tree out to the edge of the tree line. That seemed to perk up the trees a little, and they began to produce more leaves and new stems for a while. 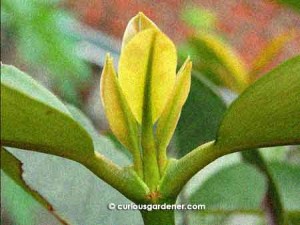 Visiting the plant nursery a few weeks ago, I asked our friend whether the trees were growing too slowly, and was told that they were. I was advised to loosen the earth and add bonemeal to fertilize them. So, I got a thin metal rod and poked it as deeply as possible around each of the mangosteen trees. I figured the thin rod wouldn’t damage the tree roots as much as a spade or changkul would. After doing that, I sprinkled bonemeal over the loosened mulch (the compost hasn’t decomposed completely yet), then did more poking to help the bonemeal penetrate deeper into the soil. After that, I watered the plants and sat back to watch.

After about 2 weeks, the trees started growing more rapidly. I was fascinated to see how the tip of each stem split to push out a new pair of leaves. It’s gratifying to see the trees full of shiny, new light green leaves, and with longer branches than ever. My next goal is for them to start flowering, because that would make my dad so happy. Both he and my mum have fond memories of eating these fruits fresh from the trees when they were children, and I’d love to be able to bring back that piece of the past for them. So, grow mangosteen trees, grow…