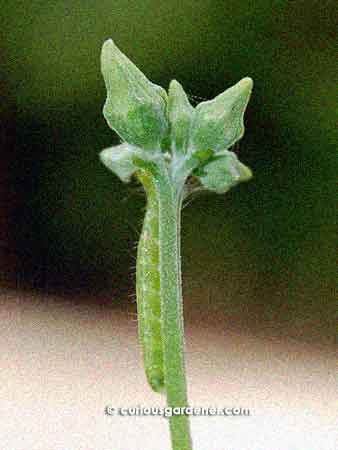 One of the caterpillars eating up the flower buds on the luffa vine. There were sticky threads criss-crossing the buds.

I’ve been keeping both eyes on the angled loofah plant ever since caterpillars started feasting on the flower buds several weeks ago. They seemed to have given up, so I was happy – especially as the two vines grew bigger and started branching out and producing more female flowers. In the last week, I was quite happy to have helped pollinate no less than 5 female flowers. Everything was going well and the fruits were growing at what seems to be their phenomenal rate of growth.

Then, two days ago, I noticed some tiny black caterpillar droppings on a leaf. Looking upwards, I saw one of those dastardly green inchworm-like caterpillars on the underside of a leaf. I disposed of it and checked for more siblings, but didn’t see any. Of course, that didn’t mean there weren’t any. 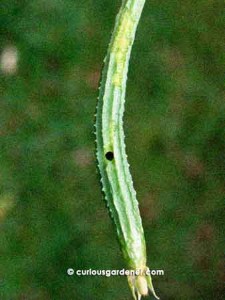 The poor baby ketola that had to be culled after being eaten by a caterpillar.

Then, yesterday, I noticed that the ridges on one of my baby loofahs were broken. A caterpillar had been eating the outside of the fruit! And the culprit was still there! Using a fallen leaf, I tried to nudge it away, and wouldn’t you know it, the caterpillar was busy burrowing into the fruit! After dislodging it, a nice, round hole stared back at me. There was nothing to do but remove that fruit, because I didn’t know if there were more pests inside it, and I didn’t want it to sap growing energy from the vine. It irritated me that one of my babies had been ravaged like that.

A scrutiny of the area revealed two more caterpillars – both on the clusters of male flower buds. These creatures have the best colour camouflage ever – it’s almost impossible to spot them! So now I have to double my checks, in case any of the other fruits are compromised. Why can’t things just go smoothly?