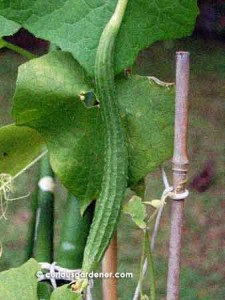 I call this "Super Luffa" since it's shaped like an 'S'

As September draws to a close, I’m looking back at the new additions we’ve had in the month.

More red okra and angled loofahs are on the way.

More aubergine fruits are developing. I wish I had labeled the plants better, because I can’t remember which are the short purple fruit plants, and which are the long green ones. The only thing to do is wait and see, I guess! The good thing is, I’m now able to identify pollinated flowers from the way the petals drop off and the calyx slowly begins to swell with the new fruit.

I have some unexpected sunflower plants growing from seeds obtained from my stunted Kong plant. After harvesting the seeds, I had thrown the handful of them into an unused planter where, on the surface, they were exposed to rain and sun for a few weeks before some started sprouting. I don’t expect much from them since they hail from a stunted parent. However, one can never say no to having sunflowers growing in the garden. 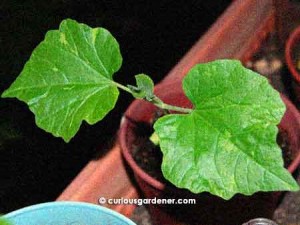 Other plants grown from seed this month include two varieties of snake gourd – I find it highly ironic that snakes have made an appearance the same month these plants started growing… coincidence? The plants are the regular green variety as well as a white one.

I also managed to grow two winter melon plants from seeds given by Novice Gardener. Along with the snake gourd plants, they are awaiting trellises to be put up for them to grow on – but will get first go as they’re bigger than the snake gourd plants. One has to make such drastic decisions… 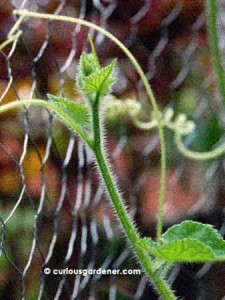 The spiky stems of the Kiwano vine

Surprisingly, I managed to grow one Kiwano plant from seeds given by a friend. Neither of us has eaten this fruit, and it’s grown as a curiosity. Judging by the leaves and vine, it appears to hail from the cucurbit family as well – a vining plant that lives up to the name of the Horned Melon. I may not have seen the fruits yet, but let me tell you, the vines are incredibly spiky! The plant grew almost 2 metres long before I finally made it a trellis, and the process of unwinding the tendrils and vine from the supports they had latched onto, and then transferring them to the trellis was a very scratchy one for me! Anyway, that plant is in its new home and with luck, we will have flowers and perhaps fruits to report in October.

And speaking of cucurbits, we have some new cucumber plants growing as well. These are supposed to be local short cucumbers, and one white cucumber plant, the latter also courtesy of Novice Gardener. 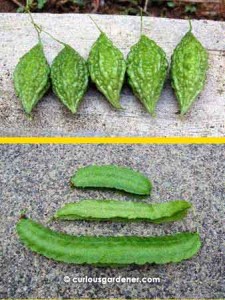 As always, there were several bittergourds. Yes, I paid more attention to the vines this month, but still missed a few fruits. Subsequently, I now have a couple more young plants…

We also harvested our first four-angled beans – all three of them.

I’m still waiting for the “prolific blooming” to make its appearance… Honestly, what is with these vines?

Last but not least, we’ve plucked the first Red Lady papaya to finish ripening in the safety of the house. Any longer and the birds would have started feasting on it. I didn’t want to cover it up on the tree because there are mealy bugs around, and they probably would relish any covering that they could hide beneath. No matter what I do, they just keep coming back to the trees. However, they’re being controlled, and our prospective papaya harvest looks good.

All told, September has been a pretty good month!