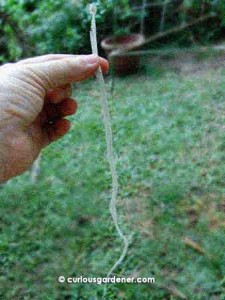 The entire skin shed by snake unknown - around 25cm long

Ewww, I was hoping that I wouldn’t have to talk about snakes so soon after seeing the Common Wolf Snake (Lycodon capucinus) about 2 weeks ago, but no such luck.

I was checking the long bean plants at the far trellis when I noticed what I thought was a strip of white ribbon draped over a flowering plant growing at the base of the trellis. How odd that it tapered at one end, I thought – and then I realized that it was a discarded snake skin!

On the one hand, I was very freaked out and looked around quickly to make sure there were no snakes in the immediate vicinity. On the other hand, I was fascinated by the patterns on the snake skin… 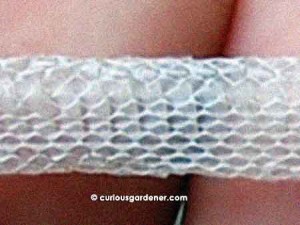 Pattern of the snake's scales on its top 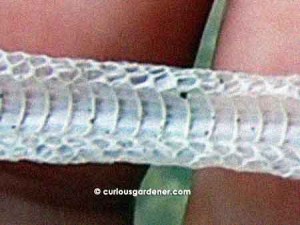 Pattern of scales on the snake's belly

The skin had a papery quality to it and reminded me of rice paper. It felt like if I wet it, it would get sticky. Not that I held it any more than I had to! 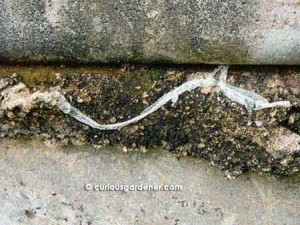 The snake skin on the wall. I know that they seek rough surfaces that give enough friction for them to slink out of their old skin...

So, unless the snake skin shrank after being shed by the snake, this one should not have come from the snake that I saw – which is not a comforting thought, as that means there’s more than one snake in our garden.

I am not happy about this situation… Eww, eww, ewww!