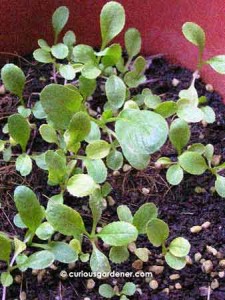 ahem... too many caixin sprouts in the same pot...

Compared to my other plants, I’ve been toddling along a little aimlessly with my leafy veggies. Admittedly, I’ve been distracted growing some other plants that made leafy greens seem rather boring in comparison. However, since I have some caixin plants that have been growing slowly, I decided to do better by them.

This leafy green was really easy to start growing. The seeds were from the common brand of packeted seeds sold in plant nurseries and supermarkets. Surprisingly, there were quite a number of seeds in the packet. They were so tiny that I just took a pinch of the small black seeds, sprinkled them over soil, and watered lightly. They sprouted within a day or so. Within a few weeks, I had an overcrowded flower pot of the plants, and let’s just say they didn’t reach maturity…

I also discovered that caixin seeds sprout as obligingly on wet tissue, which is actually easier because firstly, you can see the seeds clearly on the tissue, and secondly, they’re easier to transplant because you can see each sprout (root included) clearly. Transplanting seedlings can be tricky because when grown in soil, you can’t see the entire root and sometimes damage it when lifting out from soil. 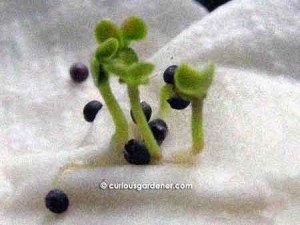 Young caixin plants look very thin and spindly. The leaf stems are very skinny while the roundish leaves on the ends look too big to be on those stems. As the plants mature, though, the stems thicken and provide better support. However, I’ve found that they’re a bit brittle – just brushing against a leaf can cause the stem to break crisply.

Despite being more matured now, my caixin plants still don’t look like those we see sold commercially. In my case, the main stem grew long (compared to the nice compact bunch that’s sold) and the plants kept leaning over. I had to keep adding more soil to prop them up as they grew older – but that’s alright because the added support seems to have helped, and they grow upright now.

In retrospect, the plants probably need much more light to look like the commercial plants. Perhaps mine were just leggy because they wanted more sunlight. I’ve moved them to a brighter spot, added some of my new compost and will see what happens next. 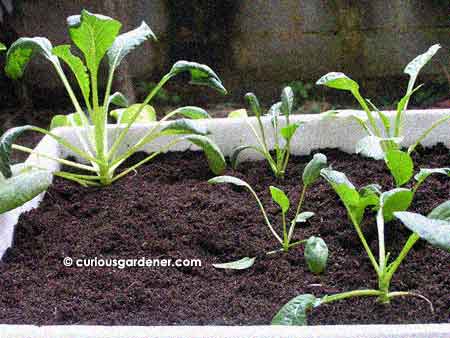 Caixin at different stages of growth

Care of caixin is fairly simple – remember to water them well and to fertilize frequently. I didn’t. Maybe now that I’m paying more attention, they’ll thrive and we’ll get to eat some!