If you’ve been following me on my Curious Gardener journey, you’ll know that I’ve been hoping to have beneficial insects thriving in our garden. Of these, the ladybug is on the top of my list. So far, I’ve only had glimpses of this tiny beetle, a couple of times last year on my cucumber plants, and just a few months ago, feeding on aphids on my bean plants. In my heart of hearts, I’ve been hoping that they make a home here, and now, finally, I think they have!

Earlier today, I was tending to some potted plants outside our kitchen when I noticed a crazy little insect running, literally in circles, along the rim of a flower pot. From the shape of it, I thought it was a thrip. A closer squint revealed that its body was not slim and smooth, but rather bumpy and uneven. I got my friend the camera to capture the image and blow it up for me to see: 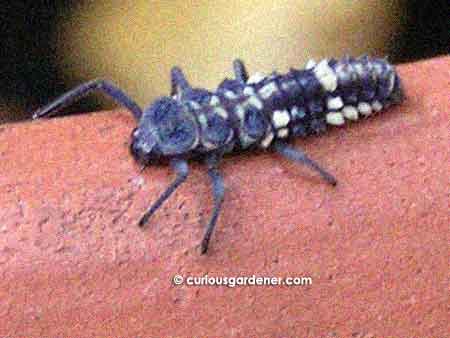 Ladybug nymph on the rim of a flower pot

I’ve heard the ladybug nymph described as looking alligator-like, and this sure looked like that! It was tiny, though – only around 5mm long – which is why it was difficult to get a good look and a clear photo of. However, I think it really is a little ladybug in the making… 8)

It even had another relative about 3 pots down doing the same thing, running along the rim of the flower pot. Interestingly, the pots contained the type of same plant – a leafy, light green syngonium. 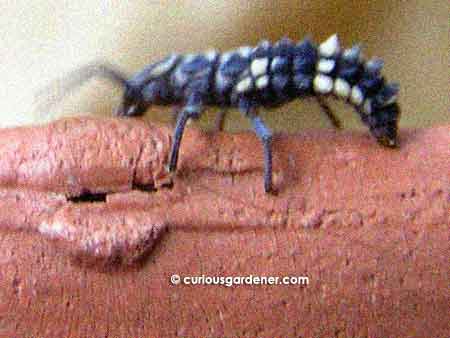 Boy, I sure hope they are ladybug nymphs and that they have more relatives, er, running around. I do believe they’re just one stage away from pupa-hood, and soon after that they’ll be little winged critters! I’m so thrilled!