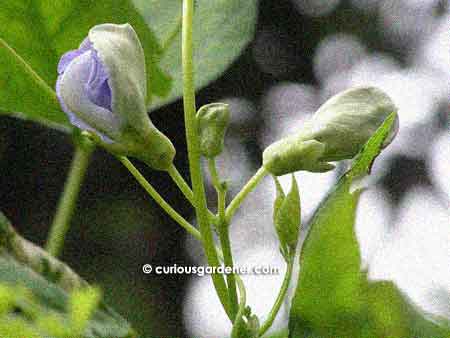 Winged bean flower and buds. I like that they're in a cluster!

Alright, this has been long in coming, but our winged bean vines finally started budding. Six seeds were planted in late February, and the vines grew and branched and grew some more. Long bean plants that were started at the same time grew and matured, bearing beans in just over a month. They have since completed their growing cycle, and still the winged bean vines continued branching and growing without producing any buds …until now.

Yes, the buds started appearing a few days ago, but were either knocked off by the rain or aborted because I suspect they were not pollinated – or they were having a test-run. I’m still waiting to see the first bean growing…

What irks me is that the flowers are quite high up. There are a few more clusters of what are probably buds, but they’re more than 2 metres up and I am not that tall… Looks like I’m going to have to keep a ladder handy from now on!