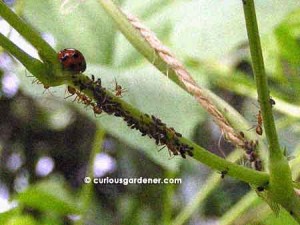 The ladybug approaching the aphid colony

I must be nuts, I thought, to allow the aphids to keep living on my bean plants.

The first two colonies that I found on my long bean plants had been sprayed a little with insecticide, before I noticed a ladybug in the vicinity. Fearing to harm it, I put the spray aside and hoped that nature would take its course and the ladybug would bring friends to eat the aphids.

Unfortunately, both aphids and ladybug disappeared and escaped my notice for over a week, and I thought the insecticide had scared them all away. Then, a few days ago, I found more aphids on my adjoining winged bean plants. That’s when I really had to restrain myself not to take action, apart from squishing a few aphids with the vague hope that the scent of “aphid juice” would attract the ladybug again, stat. Watching the aphids multiply while ants attended protectively to them was not easy. I kept telling myself I must be crazy, even despite my friend Sky’s hope that I’d one day see the ladybug feeding on the aphids. In my dreams, I told myself. 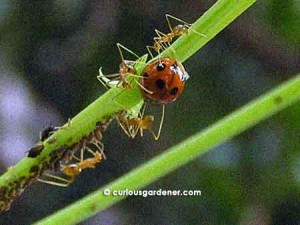 You shall not pass - ants block the ladybug from the aphids

Finally, on the third day, I saw a really tiny bug running rapidly along the stem that the aphids were breeding on. It became like a scene from a cartoon with me trying to see what the bug was, and the bug running away on fast little legs. I did see that it was round, but couldn’t determine its colour, except that it was dark. Was it a baby ladybug? I didn’t know. Do ladybugs even grow from small bugs to adults or do they morph into adult bugs after going through the larvae and pupae stages? I didn’t know that either, and couldn’t tell from the pictures on the Net, because they may not have been displayed at the same scale. Oh well.

Two days later, there were at least three little bugs running and flitting around – but the aphids had disappeared from that stem and migrated to a new vine two plants down, together with their nursemaid ants. Then, half a handspan away, I noticed an adult ladybug! It seemed to be resting on the underside of a leaf. Go eat aphids, I mentally urged it. Shortly, I was rewarded by the sight of it scuttling down the leaf stem towards the cluster of aphids. However, the ants sensed danger and ran to block the way. The ladybug did an about-turn and scuttled back up the stem.

It made me think of Pacman, especially when the ladybug turned back and ran to the aphids again… It managed to reach the edge of the colony, despite the ants trying to block it. I’m not sure, but I think it grabbed a small aphid before it turned and went back to the leaf. 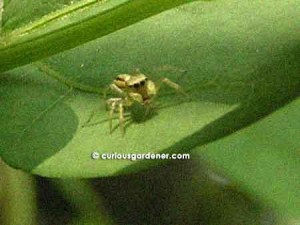 The spider munching on an aphid on its high perch

I was thrilled to see this in action!

I was even more interested to note that a spider was also feeding on the aphids. While the ants were distracted by the ladybug, the spider ran down from the other side and seized a medium-sized aphid that it carried to a higher vantage point to eat. I wish my camera had a better zoom so you could see the aphid clutched in front of it in the picture.

It’s a little mean, but I’m comforted by the fact that the aphid population will be controlled well by nature’s creatures. After all, nature knows best when it comes to maintaining a balance and we can learn when we just stop to watch it at work.