It’s such a lovely feeling when a gardener sees flowers starting to form – especially when the flowers are the prelude to the formation of fruits.

As you know, I grow a lot of my plants from seeds, and have been continuously sowing this and that since just after Christmas. The result has been all the recent growth happening here, what with leaves and buds and flowers and fruits. 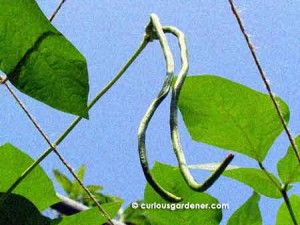 The bean plants have been growing like crazy. Each vine has started sprouting new side-vines, and it’s getting to be a real tangle! The long beans are more advanced than the winged beans, and we’ve already harvested the first few beans – oh boy, were they sweet! 8) I suspect the winged beans will start to bud within the next few weeks; but since it’s my first time growing them, that’s just an educated guess on my part. 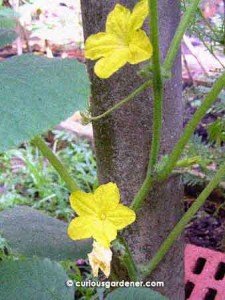 Cucumber flowers can start growing right at the base of the plant. Like most vine plants I've noticed, the male flowers start blooming first.

Our currently lone cucumber plant has also started flowering – male flowers for now, though. I planted it more because it was the only of my plants to attract ladybugs last year, and I wanted as many beneficial insects possible in what has become the kitchen plants corner of the garden. However, I wouldn’t say no to any cucumber fruits it manages to produce! 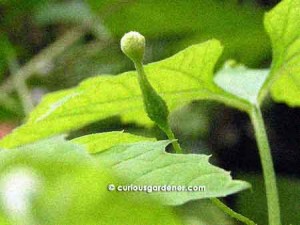 The first female bittergourd flowerbud. See the tiny fruit between the bud and stem? The males have only a long, skinny stalk supporting them. Heh.

The bittergourd vines are also growing rapidly. Side vines are growing from the main vines, and I expect my trellis to be covered in no time. Flower buds have also started to form, and I saw the first female bud – easily identifiable by the tiny fruit behind the bud – right at the highest point of the trellis. Male flowers have already begun appearing. See my post from last year on the differences between male and female bittergourd flowers if you’re interested. 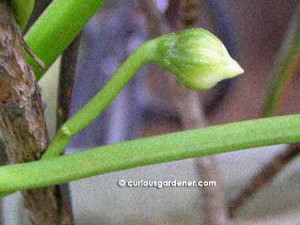 A tiny spinach ... fruit? Wonder what it'll look like when it's ripe.

Most surprising to me are the fruits forming on the water spinach plants. Ah yes, I know I should have thought of that before – if I grew the plants from seeds, then logically the seeds came from fruits, that came from flowers, right? Sometimes, I just don’t think… 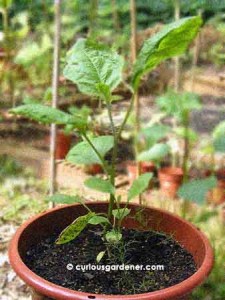 Purple brinjal plant getting its growing gig on. Finally.

The purple brinjal plants are also picking up momentum. It’s my first time growing them, and I wasn’t sure where to place them, so decided to keep them in pots. They’re getting bigger, though, and that alone makes me happy. I also managed to get viable seeds for the green brinjal (finally), and those plants are also growing, but they’re still young. I expect that the purple plants will mature within the coming month, which will be fun for me, because I love to see how each plant grows and develops. That’s what makes me the Curious Gardener!