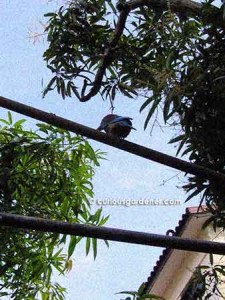 First view of the kingfisher when It landed just above me.

There are so many birds active in the neighbourhood these days that the air is full with their songs and calls. One that I thought I was mistakenly hearing was the kingfisher.

The kingfisher, as I’ve mentioned in an earlier post, normally comes by only in the evenings. However, I’ve heard it calling out at all times of the day for the past week or so.

Finally, one afternoon, I made a visual confirmation…

I was busily trying to get some close-up photos of my bean plants when the kingfisher landed on the trellis less than two metres above me and started chirping! Trying to remain calm, I raised the camera and snapped a photo – not in the best of light and certainly not from the best angle. The bird swooped off, and I thought that was the last I’d see of it. 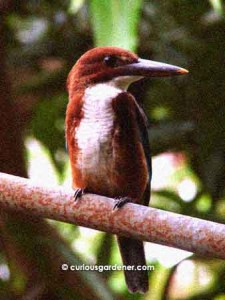 Front view of the Smyrna kingfisher.

Later that same day, it came back, and I managed to get some more photos of it as it once again perched on the frame above my bean plants.

It seemed unafraid of me and my camera, but watched warily as our dogs wandered beneath it. I guess it knows the dogs are more likely and able to catch it than I am!

This particular kingfisher is a white-throated or white-breasted kingfisher – also known as the Smyrna kingfisher (Halcyon smyrnensis).

For some reason, the body shape reminds me of a dwarf – the upper body is sturdily built while the tail and legs seem too short and squat to match the top! But, such are the characteristics of tree kingfishers – compact birds with short tails, large heads and long, pointed bills. 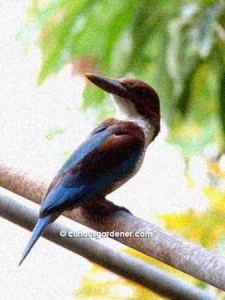 What an interesting colour combination of electric blue, teddy bear brown and white!

I was quite struck by the colours of the kingfisher. The blue was an amazing shade of electric blue that my photos don’t do justice to. The white of the throat and chest is so clean and bright that it could be used for a laundry detergent ad! And the chestnut brown of the head and down the sides makes me think of cuddly brown teddy bears!

Wondering what attracted it to our garden, I looked up its food sources. I know that they eat beetles – that’s why we normally see the kingfisher, when it comes to feed on the beetles that come to our mango tree. However, I also found out that they eat grasshoppers (hope it catches the red one that’s been attacking some of my plants), termites, scorpions, centipedes, and even small mammals, snakes and nestling birds. Well, I know we have a few of those things here, so I guess we may just keep seeing this feathered fellow around!