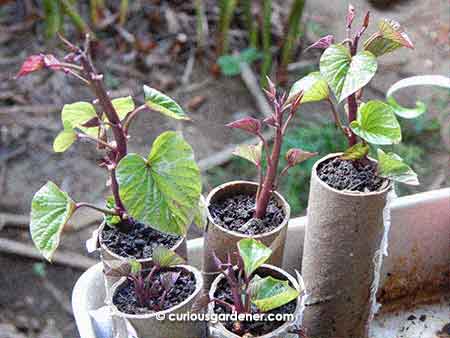 Some of the sweet potato slips growing more roots before getting planted out.

I can’t believe it’s been six years since I first tried growing sweet potatoes. That maiden voyage did not end well. Yes, we had an impressive sweet potato patch with lots of leaves to harvest, but did we have a potato harvest? Nope. Only one slightly fattened root that was the beginning of a potato. However, by the time I’d found that, I had already decided not to waste the space on growing the crop again.

Fast forward to early last year, and the bug had bitten me again. Yeah, I’m a sucker for punishment, I guess. No, not really. I just wanted to try a new way of starting sweet potato plants, and I wanted to try growing the red Japanese sweet potatoes this time. Growing the sweet potato slips went well, and we managed to grow several before the sweet potato started rotting in the water. I planted that last bit of potato and the cuttings, giving us three slips in a styrofoam box next to the house, and four in a big pot that I placed on the lawn. 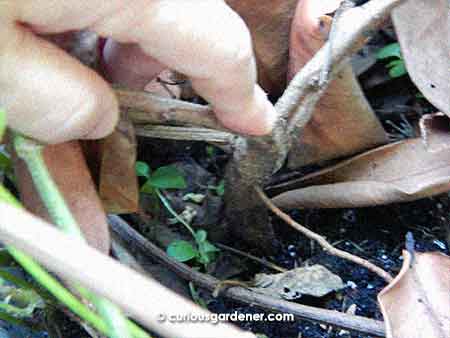 Okay, so I lost track of time, and the plants in the box grew slowly but didn’t produce potatoes, but the plants out on the lawn had a massive growth spurt and took over the lawn, part of the driveway and kept looking for more things to grow over. I drew the line when they began to grow over the swing, and have been keeping them off the paved area. At the back of my head, I thought the pot where the plants rooted must be filling up with potatoes because I saw nice thick stems protruding from the earth in there. But, like I said, I lost track of time and the plants have been growing for about twenty months.

Well, I didn’t touch the pot, thinking it was getting loaded with potatoes. What surprised us, though, was that potatoes were beginning to grow in the lawn where the spreading vines had taken root! 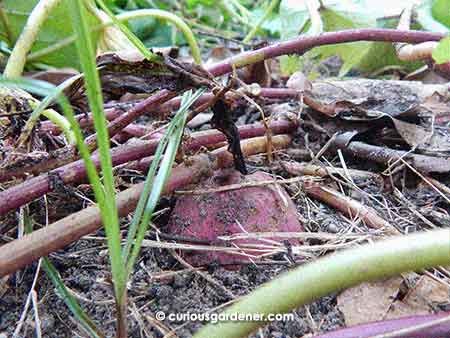 Peekaboo! A sweet potato making us aware of its presence in the lawn!

Those first few were a real surprise because we hadn’t been expecting them, and only found them because they were peeking out of the earth! Some had been discovered by insects and were partially nibbled while others had rotted because it had been raining at the time. Did I get a clue? Nope. I didn’t touch the big pot because I thought it was getting jam-packed with potatoes. So when I just finally decided it was time to check out our treasure trove of sweet potatoes, we started digging down those nice, thick woody-like stems sticking out of the pot – and we dug and dug, but there were no sweet potatoes to be found! I finally gave up, although I had to wonder if any of the roots had grown out through the bottom of that pot and were producing potatoes in the ground beneath the pot.

Well, at least the story ended up better this time – we’ve dug up a few scattered sweet potatoes over the last couple of months and know there are a couple more still growing in the lawn. I’m starting to control the vines more now, and wonder how that will affect the production of potatoes. However, I have to admit that it’s been nice having that supply of fresh young leaves as an occasional veggie dish. Success! 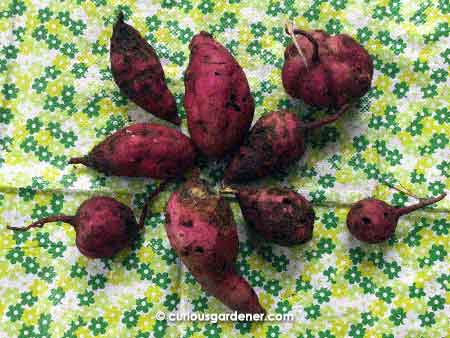