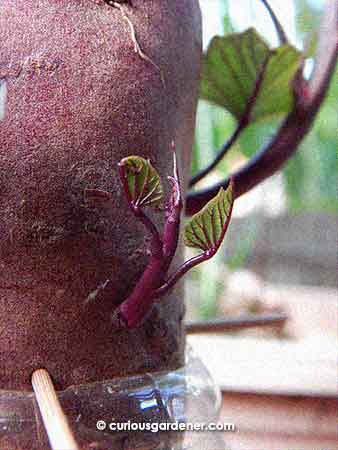 As mentioned recently, I’ve gone back to my gardening roots. First, I’ve started growing culinary ginger once more. At the same time, I also gave in to my inclination to try growing sweet potatoes again. It just took a little longer to show results.

I guess it was partially due to my gardening buddy Novice Gardener, who recently had a glut of sweet potato leaves and vines, which made me miss the sweet potato patches we had a few years ago.

Besides that, I think I’ve learned a bit more about what we can do to actually get proper sweet potatoes since my first attempt, so I kept a sweet potato to start our new plants from.

This time, instead of planting the whole potato, I decided to grow slips to plant from. Yes, I learned from that first lesson – you’re not going to get a whole load of potatoes just because you planted the entire potato. In fact, the partial “successes” – if you can call them that – were from vines grown from slips, which is why I looked up how to get slips from a sweet potato.

So here’s where the fun started. I got a small recycled PET bottle and cut away the top of it, keeping the open diameter narrow. My intention, initially, was to wedge the sweet potato into the hole so that mosquitoes won’t be able to get to the water inside. That was how it started anyway. I filled the bottle with water, stuck the sweet potato in it, and put it aside for a couple of weeks. 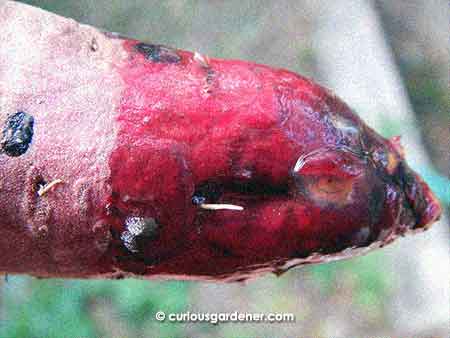 Perhaps the sweet potato was a little old, or I worried that maybe it wouldn’t want to grow here, since I’d chosen a Japanese sweet potato – you need to grow what you like to eat, right? I expected to see roots appear in the water, but nothing happened. In fact, part of the submerged potato began to look like it was softening, and I began to brace myself for failure.

Then, I noticed something happening on the part of the potato that was above water. It looked like tiny, dark purple knobs were beginning to appear! 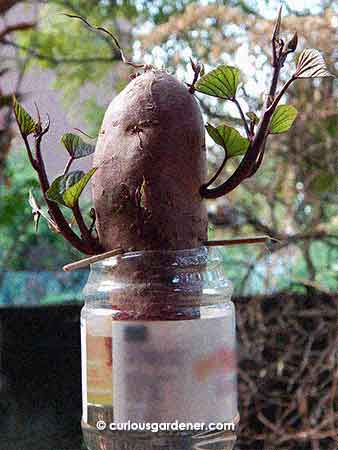 “Look at me!” the sprouting sweet potato seems to be saying…

I couldn’t believe it, but the potato began to sprout even before any roots began to grow in the water; and once it started sprouting, more and more little stems began to appear! Naturally, one of them just had to be at the rim of the bottle, so I opted to poke a couple of toothpicks into the sweet potato to raise it a little.

There are only two tiny roots growing at the moment, and the base of the potato looks like it might be rotting, so this project could still be a little shaky. I’m quite sure I can get a few slips from it, though. Hopefully. They have to be big enough to grow roots of their own. Stay tuned.