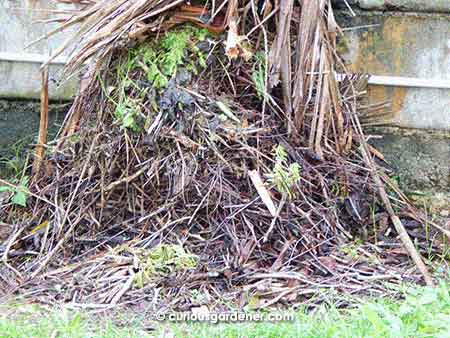 Unsightly compost heap after a week – some things have started breaking down while other are still trying to grow!

There are so many approaches to making compost – tumbling or big bins, heaps that you may or may not turn, composting worms, hugelkultur, etc. I had thought of trying the Geoff Lawton method of making compost in 18 days, but after turning the compost pile twice, my back complained too much and I left the pile to its own devices.

It is interesting, though, to think of how to fast track the composting process. That’s how the folks at Greenback compost do it, but they have those nice huge machines to do the shredding, turning and sanitizing for them. Being human, I want to improve the soil in our garden, and I want to do it fast.

Well, here’s something I observed recently. I had a pile of grass clippings that was supposed to have been added to an existing compost heap but instead was left alone for a week on the edge of the driveway. The following week, I happened to prune a few shrubs but didn’t finish breaking them down properly, and left the branches atop the grass clippings from the first week. Yes, our garden can look messy a lot of the time… The following week, I finally got around to clearing that pile, and what did I find?

The leaves and grass had broken down, leaving the twiggy bits looking like a wooden skeleton heaped atop them. Thanks to the rain we’ve been getting, the woody bits were softened and the thinner pieces had already started breaking down. Best of all, right at the bottom was a thin layer of dark compost that was inhabited by a number of large earthworms. I couldn’t believe that this had happened in just over two weeks, and all by itself!

Thanks to this observation, I’ve started a couple of new compost piles where I’m trying to replicate the conditions – a good, thick layer of green leaves at the bottom, followed by chopped, short bits of wood and dried leaves, then repeated with the leaf and carbon layers alternating in smaller and smaller diameters to form a peaked heap. My hope is that the bottom layer of green leaves will attract worms and other decomposers, that will work their way upwards. Of course, having the carbon-nitrogen contents that are needed for composting may create the right conditions for the compost piles to heat up and break down, but with the rainy weather, I expect that critters will be the ones helping most with the decomposition process. 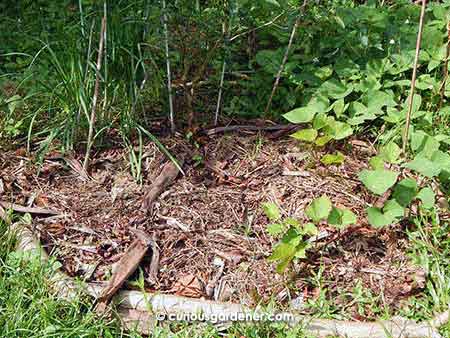 The mulched bed after 2 weeks. You may notice that the layer of mulch isn’t even, no thanks to dear Mr Rooster who was happily searching for food when he visited last week.

In addition to the heaps, I’ve also tried dumping a layer of leaves and twigs atop some cleared lawn (the Lawn War is still ongoing) – because you know that any exposed soil will just encourage weed seeds to land and take over… I hope that the layer will decompose into a nice compost as a preparation for my planting something there soon.

Why I’ve chosen to try this is because I’ve noticed how moist and dark (which means nutrient-rich to me) the soil under shrubs and other places where fallen twigs have accumulated over time, is. The accumulation of plant debris is usually caused by rain – the pieces may float along in puddles until they get snagged or the water recedes, then they simply decompose where they land. Since this is another way that nature handles things, I’m all too happy to try to imitate it.

Besides, it reminds me of the famous Back to Eden gardening method where you pile several inches of wood chips as a mulch, which will break down over time and create a lovely compost. It is used best, it seems, in places that lack soil nutrients, and has been used most successfully in converting places like old car parks into fertile, productive garden plots. That’s not as incredible as it sounds if you consider that seasonal plants need only a couple of feet of soil to grow in.

Well, I know that the soil in our garden isn’t terribly nutrient deficient, but I want to create areas where we will grow our edible plants, and I would like those areas to be nice and fertile. So I’m going to continue trying to observe what happens in nature and to follow suit. I’m sure there will be learning curves, but that’s all part of the process.