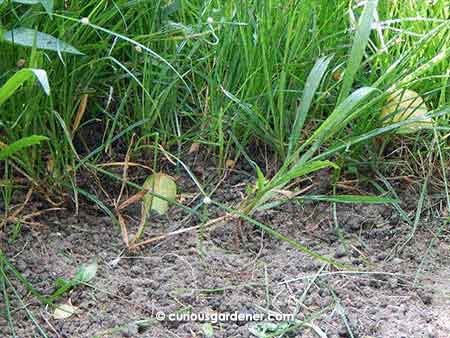 Edge of the lawn war zone – see how there’s just the one little plant of cow grass and a whole sea of other irritating grasses?

I may have mentioned once or thrice how irritated I’ve become with mowing the lawn. Cow grass is fine with me – it has grown in our garden as long as I can remember, and is not to difficult to maintain. However, there are others that I don’t know the identities of, but are both adept at avoiding the blades of the lawn mower and grow prolifically. I’ve found that they have taken over a lot of the garden and grow back within a week, so that I have to cut the grass every week if I want the garden to look domesticated – which I haven’t been able to manage lately. So, I’ve started to wage war against the grasses – and weeds – that have been trying to dominate the garden. 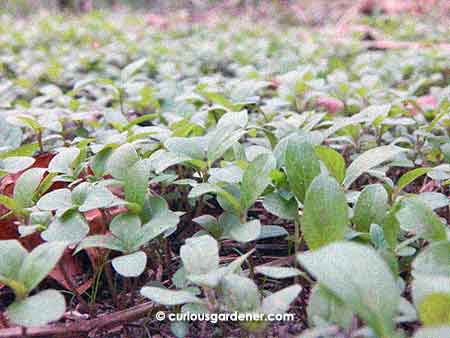 Just over a week after pulling out the grass I don’t want, a sea of weeds has sprouted. I wish they were leafy greens instead…

“War” against a plant means not simply pruning it, but uprooting the entire plant. I know that this will take time because the plants I don’t like have had time to disperse themselves and lots of seeds. Plants like grasses also spread by runners, meaning they send out new stems that can be layered over themselves. So, I’ve been denuding the lawn bit by bit, leaving the cow grass and yanking out the other plants I don’t want.

I have no idea what the other grasses are called. One may be lovegrass. Another may be something called nutgrass. Yet another may be what I’ve seen in an online catalogue as “bunnytail” grass because of the white ball-like structure of seeds. And yet another has horrid, tough runners that run beneath the soil. And all of them, I believe, will be able to regrow from bits of roots left in the soil. So, getting rid of them completely is going to be difficult. 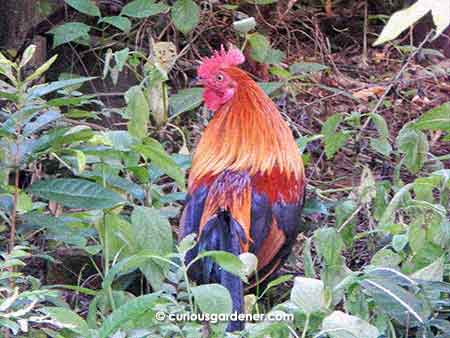 The neighbourhood’s vagrant rooster – we never know when he’ll decide to drop by, but he certainly loves scratching around the overgrown areas!

One thing that nature doesn’t like is to have vacant bits of land. If there’s an opportunity, something that can grow in that spot, will grow. So now after removing the bulk of unwanted grasses, I have weeds (also known as plants I don’t want growing there) to contend with. Argh. I’d like one of Geoff Lawton’s chicken tractors with a troop of chickens to scratch up the ground and eat up the weeds and their seeds for a week, then scatter my veggie seeds and let those take over the ground. Instead, I have just normal human power and the sporadic visit from Mr Vagrant Rooster, which aren’t as effective.

The Lawn Wars will continue…