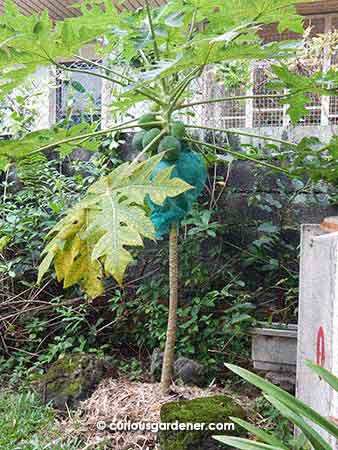 Here’s the papaya tree in early October, when the top began to start leaning over to the left…

Remember the “miraculous” papaya plant I started from a stem cutting? And remember how I “let” it get root bound and still managed to rescue it? Well, the poor plant has not overcome all possible obstacles yet. The unfortunate result of it getting root bound was that the main stem had begun to get thinner and thinner. I managed to get around that by planting it as deep as I could, now knowing that it will grow new roots along the stem when covered by soil.

Well, as the plant began to bud and develop more fruits, it began to get top-heavy and started leaning to one side. What concerned us most was that the lower part of the stem began to look too thin to support the growing weight, and began to bow little by little. The topmost part of the stem has been thickening properly as it should, and will definitely have no problems holding up the many fruits that the plant will bear. Our concern was whether the bottom would snap under the weight of all the fruits. 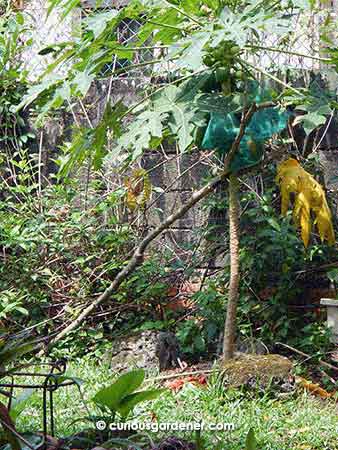 I was all to happy to find a forked support for the plant rather than have to construct a tripod around it.

I thought I could get around this by mounding more earth around the stem, which we now know will cause the plant to start growing new roots. My thought was not to pile up all the earth immediately – and my ultimate aim was to build up by another 2-3 feet, covering all of the too-thin stem – because I wanted to first make sure the stem would not rot away or anything drastic like that. However, the haze happened, and my dogs for some reason started digging a massive trench nearby, and I only mounded up the soil once while coping with the other things. Then the fruits suddenly started developing much faster, and the stem began to bend even more… 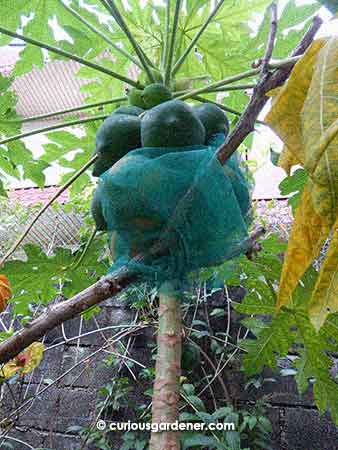 I think the best way to describe this is that the tree is absolutely LADEN with fruits! No wonder it began to lean over so much.

In a bit of a panic, I managed to find a sturdy branch of the Peacock tree that I had pruned off a while ago, that was forked – I’ve been collecting branches that I prune to use as plant supports. Fortunately, this one was perfect for lodging the fork just below the lowest fruits and jamming the other end into the ground to hold the stem straight and steady. (I was not enjoying the thought of having to create a tripod to do this…) As we harvest fruits, I can raise the fork until it reaches the part of the stem that has thickened properly, and in the meantime I can continue mounding up the soil. I hope that this will be the last of this poor plant’s trials. I know I certainly could have done much better by it. However, this is going to take a little time to do. At least we managed to worm our way around the issue once more.