I try not to keep count of the ups and downs when it comes to growing fruits and veggies, because there are simply too many variables to make growing things organically uneventful. But… lately, it hasn’t been a “winning” experience. 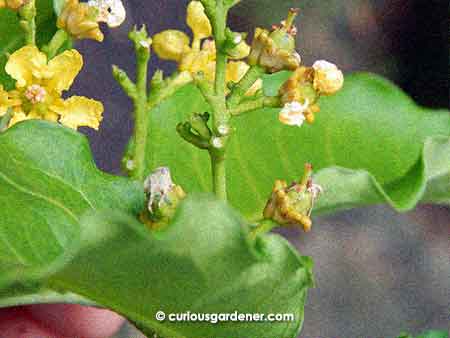 Peanut butter plant flowers blooming, with hopefully a couple of potential new fruits on the way.

The first pair of peanut butter fruits disappeared – probably into the stomach of a hungry bird. They were tiny things, anyway, and were probably just a snack to the bird. I do wish we’d had the chance to taste them, though. The plant is still budding, and I hope there will be more fruits on the way. 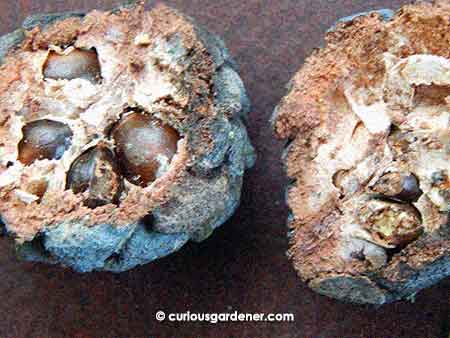 Desiccated custard apple fruit direct from the plant. What more can I say.

Then, the first custard apple fruit stopped growing. It was still small when it started turning a bit pinkish, then it turned a darker colour. I finally decided that it was not going to grow to full term, so I removed it from the plant and cut it open to see how far it had developed. The first thing that surprised me was that it was hard and almost woody in texture. The second thing was when the fruit was in (imperfect) halves and there were big, formed seeds inside! Well, I didn’t think the plant was mature enough to support the fruit – it still has only two stems bearing leaves, and most of those fell off in the hot weather in June/July. Given time, I’m sure it will become a very productive little tree. 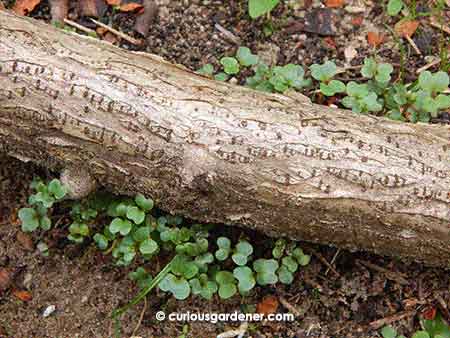 Clusters of Chinese kale sprouts WHERE I DID NOT SOW THEM!

My third tale of woe concerns trying to plant out a bed of veggies. If you remember, I’ve been having a “lawn war”, pulling out weeds and types of grasses that I find too invasive. Instead of leaving bare patches of earth, I scattered an entire packet of seeds of Chinese kale over the weeded area to fill up the area so that weeds wouldn’t take over again. There must have been a hundred or so seeds in that packet – you know how tiny leafy veggie seeds are and how they pack seeds by weight, right? Anyway, it was just my luck that it rained quite a bit in the days after I scattered those seeds. The rain was apparently strong enough to dislodge the seeds from the soil and make them follow the water such that when they started germinating, I found them clustered around things that the water had probably had to flow around! I think the word “chagrin” describes my reaction on seeing that… 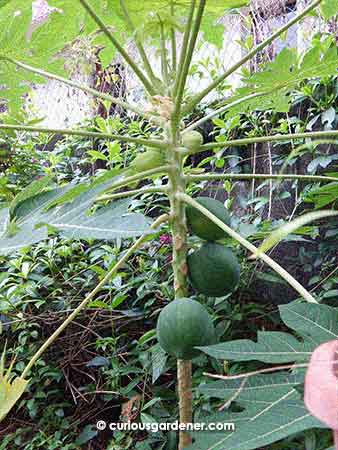 More and more papayas starting to grow. A cautious Yay!

Well, it’s not all bad news. At least the Red Lady papaya plant is getting into full fruit production.